Workers at the Japanese fast-food restaurant chain Sukiya went on an unofficial strike in May in protest over poor working conditions. Sukiya has been on a push to cut costs by operating branches for night shifts with a single worker, even if just a part-timer. The chain is one of the three main beef rice bowl restaurants, which is a highly competitive fast-food sector in Japan with each of the main chains vying to outdo the others’ latest rock bottom prices. However, Yoshinoya and Matsuya, the leaders in the sector, always have at least two people working at a restaurant, one of whom is usually a full-timer. 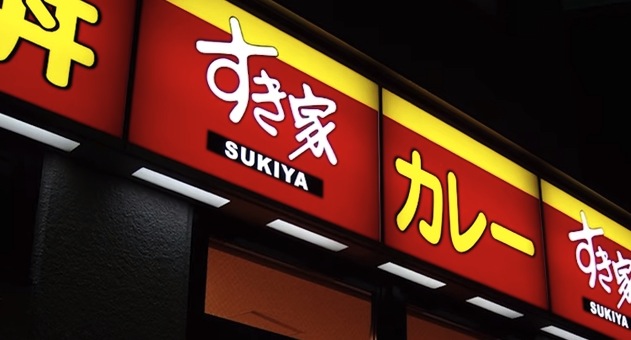 The problems began in February when Sukiya introduced a new nabe (hot pot) dish to its menu which took longer to prepare that the usual fare. Overworked part-time staff began to quit in droves because the pressure to cook and serve the meals, as well as handle all the cleaning up was too much. This led to temporary closures of over 100 branches between February and April and the labour issues came to the fore. It then garnered the attention of activists.

As is common practice today in Japan, social media was a major factor in the campaign, especially on Twitter. This trend has been apparent since the post-3.11 anti-nuclear power movement began. Sukiya staff also went to 2channel, the famous Japanese online forum, to air their grievances about their workloads. Pictures like this, showing how overworked the staff were, became a talking point for netizens.

Unwashed dishes piled up at Sukiya, apparently due to the staff being too overworked.

Workers at some branches went on strike on what they called “Meat Day” on May 29th (it’s a pun, since “29” in Japan can be read to sound like the word for meat). A union in Chiba led the strike and, though Sukiya’s official part-time workers’ union condemned the action and said other workers around the country did not follow suit, the unionists claimed there was solidarity nationwide. The “Meat Day” concept took off online. Workers at branches adopted a tactic of sabotage, deliberately taking the day off, arriving late for a shift, calling in sick and so on. The result, as social media showed, was that several Sukiya outlets closed due to staffing shortages, usually indicated by hastily-written notices stuck onto the doors of branches. Photos of these then spread over Twitter.

Notices put at a Sukiya branch saying the restaurant would be closed due to staff shortages on the day of an unofficial strike. Images like this spread over social media.

The strike followed growing attention on the growing conditions at Sukiya, as well as protests on May 15th where activists in Japan joined global peers protesting low wages at fast-food restaurants. A demo was held in central Shibuya outside a branch of MacDonalds, the kind of place frequented by hordes by burger-munching teenagers every day of the week without a thought for the wages of the part-timers doing the deep-frying and serving.

Sukiya is run by Zenshon, a company that was already known to activists as a “black corporation”. These are the businesses that have made a name for themselves for putting profit over the wellbeing of their employees, to such an extent that it has even led to deaths through overwork, coining a new word, karōshi, in the process. “Black company” has now become another buzzword to label these corporations that force workers to do lots of overtime. They can be service industry or white collar, and they even have their own “awards” now, dispensed to the worst offenders. The izakaya restaurant chain Watami is probably the most infamous black company in Japan today.

Both Old Left (e.g., the Japanese Communist Party) and New Left (e.g., the Revolutionary Marxist League) have also raised awareness recently of how Toyota, the largest automotive corporation in the world and immensely profitable, pays no corporate tax in Japan. Whereas tax evasion and avoidance schemes by major companies have drawn much ire from citizens and campaigns in, say, the UK of late, leading to flash mob-style demos against the main culprits like Vodafone, ordinary Japanese have yet to act in any meaningful way. An obstacle to the kind of protests and stunts against non-tax-paying corporations in Japan is that demos have to be registered in advance. There is an ambiguous loop-hole where you should be safe if just standing with a sign outside a building or orating on the streets, but if many people gather to protest, you could be arrested for breaching bylaws on public demonstrations.

The Sukiya campaign has been championed by Karin Amamiya, a popular writer and activist who boasts a pretty unique trajectory. Originally a right-wing singer in a cosplay punk nationalist band, she was the subject of the documentary Atarashii kamisama (The New God), which followed her disillusion with the Right, emotional troubles, and growing affection for the director, whom she later married. Tenkō (literally, changing direction) is a leitmotif that haunts Japanese radicalism, though it is rare to see such an example of a major switch from ultra-Right to the mainstream liberal left-wing. 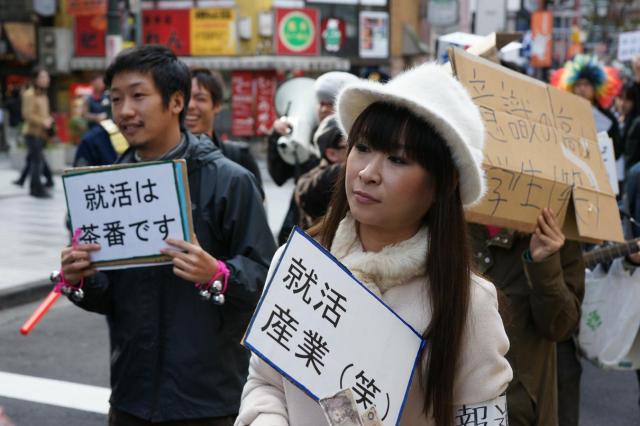 The writer and activist Karin Amamiya

Today Amamiya is a key campaigner on issues of disparity and the precariat class, and writes a regular column for The Big Issue. She still maintains the same zest for cosplay and joie de vivre as before, usually dressed up in a maid costume at demos, though we should not discount her for her quirks. She serves as an apt example of the Heisei-era protest movements that are non-accusatory and playful. Called “freeter activism” (freeter is a type of precariat worker in Japan) by Carl Cassegard, their protests are characterized by music, costumes and a far more upbeat nature to the New Left movements that were at their height in the 1960’s and 1970’s.

It is also interesting to see how mutual issues mean that today the two movements are converging. I recently attended a demo in Fukushima which featured a healthy turnout of veteran leftist radicals parading very effectively with a float-wielding motley crew of nonsectarian activists of the new generation.

Some called it a workers’ revolt or even the nabe rebellion (after the new dish that caused the strife), but whatever label it will ultimately get, the Sukiya controversy and campaign have had positive results. Sukiya has increased hourly wages for staff in certain areas. While not up to the levels demanded by the Chiba union, it is a step in the right direction as far as the overall campaign is concerned, and a sign that unionized action could do even more.

Unions in Japan have been atomized since the collapse of the General Council of Trade Unions of Japan (Sōhyō) in the late 1980’s and due to the Japanese government’s pursuit of neoliberal policies of privatization, outsourcing and union-busting which saw the national railway and other major elements of labour power depleted. Perhaps there is no greater symbol of how things have changed and how the LDP has succeeded in both weakening and hijacking the traditional bastion of the Left by the bizarre invitation extended by Sōhyō’s successor, the Japanese Trade Union Confederation (Rengō), to PM Shinzō Abe to attend its May Day rally in late April.