What’s been happening? A radical two weeks in Japan

There is a lot of information and misinformation floating around the interwebs, much of it sourced from the same news wire articles, so I thought it might be beneficial to write a summary of what’s been happening.

This all comes against a backdrop of renewed arrests in the ongoing Hōsei University conflict, non-violent resistance at Henoko Bay, and a rocket attack in Saitama on a contractor working for the Henoko Bay relocation.

Many were shocked by the Kumano raid. It’s certainly the largest deployment of riot police on a campus in Japan for years, likely since the peak of the recent Hōsei troubles. However, some students showed a nicely sarcastic way to protest the raid. 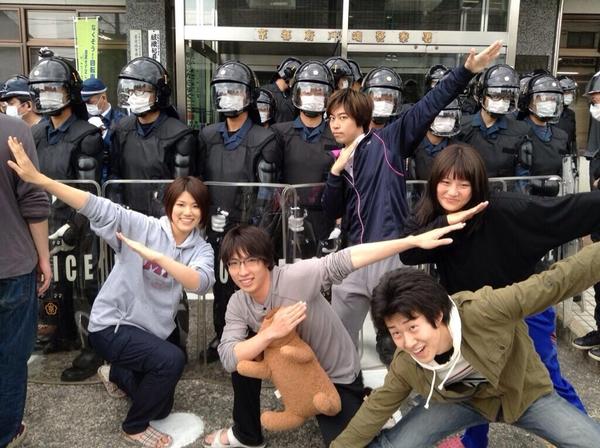 The dormitory raid generated a lot of publicity in English-language news sources. What hasn’t been reported enough is that behind its prestigious trappings, Kyoto University actually has a formidable radical pedigree. It was the birthplace of Sekigun-ha, for example, and the Kyoto Partisans. Over two years ago Chūkaku-ha re-established a student group at the college called Dōgakukai, though it has not been granted official status.

Digging a bit deeper and speaking with a Chūkaku-ha activist, it seems the arrests on November 2nd were bungled. During a demo or rally the security police will typically work closely with the uniformed officers to target who they want to arrest and prepare a strategy in advance. This was not the case this time, with a zealous uniformed officer arresting the first activist for a minor scuffle that would ordinarily be shrugged off, which then escalated. The police were so unprepared they ended up using taxis to transport the activists to a station. It is highly unlikely the three will be charged once the 21 days they can be held has elapsed.

The police seemed to panic, sending a young security officer (Yusuke Inoue) to the campus to observe activists handing out handbills in support of the arrestees, but then made the error of following them into the campus and getting caught.

After the University of Tokyo Poporo affair the courts confirmed the inviolability of the campus, though this was reduced during the height of the 1968-69 student movement peak during which riot police made frequent, violent incursions onto campuses around the country. A new university control bill in 1969 also gave the police further rights. That being said, Kyoto University has an agreement with prefectural police to be notified if police wish to enter the campus. Only certain unusual cases like the University of Tokyo, which witnessed the most serious student revolt, are apparently more open to police entering the campus to deal with radical elements.

The police were embarrassed by this and seemingly went into overkill mode to make a show that they were dealing with a dangerous group. The Zenshinsha raid was carried out in full view of five media broadcasters — more than usual — and with a metal cutter used for dramatic effect to open up the door. But in the end the raid was perfunctory, finishing much sooner than usually and with the police only confiscating a few party organs. Likewise, the dormitory search raid was almost an act of vengeance, a performance of power for the cameras, rather than an action possessing any practical value.

The irony is that all the police may ultimately achieve is to further bolster the revival of student activism that has been growing at Kyoto, Hiroshima, Tōhoku, Hōsei and Okinawa campuses for some time now.

1 Response to What’s been happening? A radical two weeks in Japan