The Wages of Resistance: Narita Stories, a documentary about Sanrizuka’s dissenting farmers

When the new low-cost carrier terminal opened at Narita Airport recently much of the overseas media reacted with glee to the design: a bold “running track” interior fitted out with Muji furniture. Credit where credit is due; it is a cool and original idea. But the attention given to the fun aspect of the opening disquiets. There is another side to the Narita Airport development which stubbornly refuses to go away, no matter how much fanfare greets the latest building or addition.

The airport was violently opposed by local farmers from its announcement in 1966. New Left groups joined the struggle from 1967. LCC passengers may be surprised to learn that the movement continues today: a demo was held in late March in Narita City, attended by 920 people. Several court cases involving land, noise pollution and the forced removal of the so-called “solidarity huts” (danketsugoya) drag on. Muji furniture or not, this protest movement has not died away.

I finally got a chance to see last year’s documentary The Wages of Resistance: Narita Stories when it was screened at a cinema in Shimotakaido as part of a documentary festival.

In Japanese the title is Sanrizuka ni ikiru, which translates more accurately as “To Live in Sanrizuka”. The English title is, of course, a reference to The Wages of Fear, though it is something of a misnomer since arguably it does not actually feature the main people doing the “resistance” today.

It focuses on certain farmers and locals who have been involved in the protest movement since it started in the late 1960’s and through to the present, including some families who accepted payments and moved further away to new properties in the 2000’s, as well as farmers who continue to till their fields under the rumbling row of jet engines.

The interviews (in colourful Chiba dialect and at the families’ resplendent new homes) are intercut mostly with archive footage, drawn from films by Ogawa Productions and others, often cleverly edited to show the interviewees as they appeared in the past scenes. Otherwise, the film is reliant on lots (and lots) of shots of fields with planes passing overhead. The problem is this makes the documentary always feel like it is just beginning; it has too many establishing shots and structurally this doesn’t sit easy with the viewer.

It covers several of the major stages in the protest movement through interviews and archive clips, including the suicide of local activist Fumio Sannomiya, the notorious expropriation of Yone Ōki’s land and the deaths of three police officers in 1971. The famous photographer Kazuo Kitai also appears, revisiting the area he helped make iconic through his images.

Two of the interviews grow powerful when discussing Sannomiya. Tears are shed and in spite of the gap of four decades, it hits home how personal and traumatic the protest was for the participants. Another great moment of drama is captured when one of the elderly mothers is visiting a cemetery and a former neighbour chances upon her. The neighbour, Ryūzaki, is also a woman but dressed smartly, in contrast to the “peasant” garb of the veteran. They exchange some polite words about how tough it had been. Yes, it was all the government’s fault, wasn’t it? Yes, it was… She leaves with a friendly farewell. The director then asks who she was. The elderly woman turns and says her family immediately sold out and left. You see in that instant how the community was destroyed by the airport development, though not every rift has stayed bitter. One of the families who moved to a new house has a monument outside that says they are “airport refugees”. 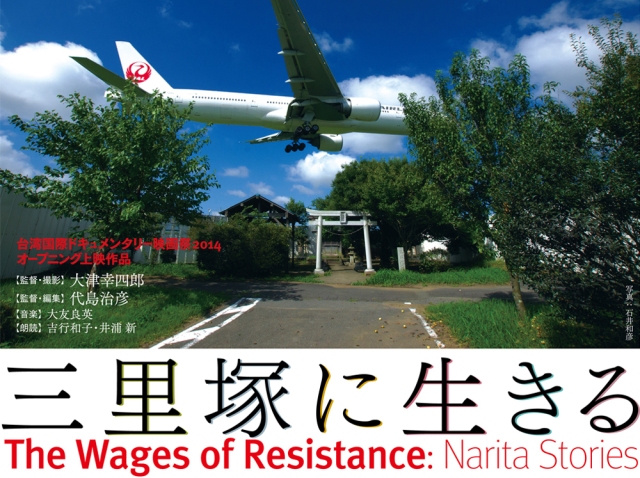 The directors Kōjirō Ōtsu and Haruhiko Daishima deliberately wanted to focus only on the farmers’ lives, not the parts played by New Left “sects”, which have given the Narita protest a negative image (in the words of one of the directors at a post-screening talk). They wanted to reclaim the protest as only a local experience that was about property and rights.

However, the complete absence of Kōji Kitahara and his important protest group jars. Ultimately the archive footage feels disjointed and arbitrary. Why is Issaku Tomura, the original leader of the movement, hardly shown at all? The choice not to fill in all the gaps about the evolution of the protests may be a cardinal sin in some people’s eyes.

And if you are going to do interviews only with one side of the story, there are always risks. You cannot use the name of the protest league, Hantai Dōmei, without at least telling uninitiated audiences that there are in fact two Hantai Dōmei in existence today: one is the original league, still led by Kitahara, and which remains supported by (formerly militant) New Left groups like Chūkaku-ha; the other is the so-called Atsuta-ha faction, who have entered into limited negotiations with the Narita Airport Authority (now Narita International Airport Corp.) in recent years.

Of the ongoing court cases, the most pivotal suit currently involves the land of organic farmer Takao Shitō, who is in the Kitahara faction. Of course, we do not know if there was an attempt to involve the Kitahara-ha or what happened exactly behind the scenes. And yet not even to reference this severely confines the scope of the documentary. The result is a human and quiet portrait of the movement, but not the whole picture.

There is also no mention of several major incidents, nor is there any real explanation for the context of the protests (the student movement in the 1960’s, the Vietnam War, the other controversial rural developments and environmental problems in Japan at the time). The Sanrizuka movement was not just about fields. While the decision not to include the New Left, either in terms of their past involvement or their continued presence, is no doubt artistically sincere, it may merely confuse, since the student activists are there in their helmets in the archive footage and their contribution cannot be ignored.

The film ultimately works in its own right and adds something to the documentation of the movement. Gripes of what is missing aside, to make a truly comprehensive film about the Sanrizuka protests, past or present, is likely a fool’s errand.

Kōjirō Ōtsu actually died shortly after the completion of the film. A veteran documentary cameraman, he shot several major films by the likes of Shinsuke Ogawa, Noriaki Tsuchimoto and John Junkerman. Some of the Ogawa film he worked on is used as archive footage in the new documentary and the second-to-last final shot is actually of a young Ōtsu being escorted away by police. He was briefly arrested in 1968 at a confrontation with riot police during the filming of the Ogawa documentary.

In this way, returning to Sanrizuka for the first time in forty-five years was a journey back into Ōtsu’s own past contributing to documenting the struggles as part of Ogawa Productions. A retrospective of his career is being held at Yokohama Cinemarine in May, including screenings of the Ogawa and Tsuchimoto films, and The Wages of Resistance, which in a way is a companion piece — a Sanrizuka Revisited segment — to the several films Ogawa and his collaborators made during their years living among the villagers.

In spite of an obviously limited budget, the producers managed to recruit hipster favourite Ōtomo Yoshihide to do the soundtrack and subtitles by John Junkerman for overseas distribution. The documentary is receiving invites to screen at many Asian film festivals. Do see The Wages of Resistance, by all means — just don’t see only The Wages of Resistance. To understand the complexity and trauma of the Sanrizuka movement requires stamina and detective work.

The epigraph for the film is taken from John 12:24: “Very truly I tell you, unless a kernel of wheat falls to the ground and dies, it remains only a single seed. But if it dies, it produces many seeds.”

This entry was posted in Reviews and tagged Narita Airport protest, Sanrizuka. Bookmark the permalink.