It’s a Buddhist monk group formed not for musical purposes, but for magical ones. Their goal is to invoke the dead and the gods to pass judgment on Shinzō Abe and his government’s nuclear and militarist policies.

The beleaguered prime minister is already facing mass demonstrations against his state security bills (something like 120,000 protestors in Tokyo alone on Sunday), as well as student hunger strikers. He seems to have faced off his rivals in his own party ahead of the upcoming leadership election this month. But now he has to confront the forces of the supernatural.

While monks have been prominent at the demos this year, this group of monks were originally active in 1970, using magic (jujutsu) from Tantric Buddhism to curse corporations and factories that had been responsible for Japan’s chronic post-war environment problems. Now they have returned to combat both the restarting of Japan’s nuclear reactors and the security bills, which opponents say breach Japan’s pacifist Constitution by allowing the Self-Defense Forces to engage in overseas operatives (euphemistically shrouded in legalese as “collective self-defence”).

Whereas the 1970 incarnation of the clique featured eight monks, this time there are seven, with the number in the name a reference to the loyal retainers of the Chūshingura.

On August 27th the monks held a peculiar prayer meeting (kitōkai) at the protest camp that has been occupying the plaza outside the Ministry of Economy, Trade and Industry since autumn 2011.

The title of the event was: “The dead shall judge.”

The monks claim to convene with the dead to judge the crimes of contemporary Japan, which has shifted seismically from its spiritual roots. The official statement by JKS47 is a rather confusing and esoteric text that obscures more than it illuminates. They say their mission is to induce the kotodama (magic words) of the gods and transmit them in order to co-exist with and fight alongside the dead. They profess that jusatsu is a mystical wonder achieved through the grace of the gods. But essentially, being made up of the characters for “curse” and “kill”, it implies a deadly malediction of some kind. 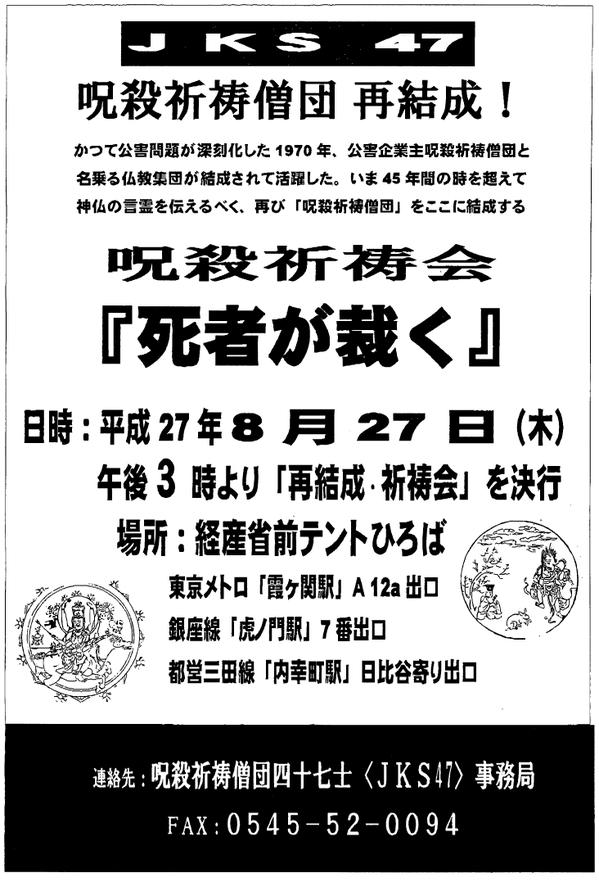 However, the monks responded that the character that normally means “curse” here means “pray”. Their event invoked the judgement of the gods and the dead to cleanse yourself and others of worldly desires. The monks at the meeting told at least one member of the press that they were not performing their jusatsu towards a specific group or person. (That being said, the monks’ choice of location for their prayers surely speaks volumes.) During the event they also did not actually use the phrase noroikorosu (curse to death) as they had in 1970. Heisei-era magic is a tamer affair, it seems.

Whether it’s a real curse or not, this event was certainly an intriguing, if a touch arcane, new kind of demo to add to the history of Japanese protest movements.