Yesterday I wrote a long-ish post about last weekend’s attack on the anti-nuclear power protest tents that have occupied a corner of land outside the Ministry of Economy, Trade and Industry (METI) in Kasumigaseki since 2011. I included some of the history of the tents and resistance against the orders calling for their removal. After the Supreme Court rejected the activists’ final appeal in late July, the end seemed nigh and it seems I jumped the gun.

The post about last week’s incident swiftly became obsolete when around 100 security guards and court officials arrived at the tents in the early hours of today, August 21st. Starting at 3.30 a.m. on the 1,807th day of the sit-in, it took all of 90 minutes for them to remove the tents, placards and other materials that were the signs of a five-year protest movement. There were apparently some five activists staying at the tents overnight but they could do nothing to prevent the removal.

The choice of a predawn raid to enforce the eviction was surely a deliberate one to avoid trouble with protestors. If it had been during the daytime, the activists could have quickly mobilised dozens, maybe even hundreds, of supporters, as we saw at last weekend’s incident. Earlier on August 21st, police and security guards completely barricaded the corner of the street in a show of force in case there was an ugly response from activists.

Today there was also a demonstration by a hate group in Kawaguchi City, on the outskirts of Tokyo, which consumed the manpower of the counter-protest group CRAC, who otherwise may have rallied activists to the ministry. 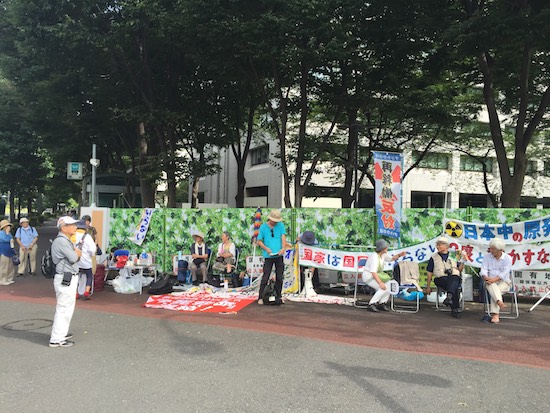 Ironically, I had been planning to go see the tents today, since I knew it might be my last chance. In the end, I missed my opportunity. Nonetheless I went to see the aftermath and found a mood that was muted yet resilient. There were no more tents; the iconic facade of the site was gone, replaced by large fences obstructing any new tents from being erected. But still there were some 15 protestors sitting on chairs, banners unfurled on the pavement and flags stuck into the hedges. A couple of activists were banging a drum. There was a police presence, of course: a few officers and some riot police vans. A random rightist was spewing forth anger at the protestors from the street while being physically held back by police officers. You can just about see him in the right of the photograph below.

Earlier an activist had been arrested and was being held at a police station in Marunouchi, and many of others had gone there to call for his or her release. By chance, Masami Yoshizawa from Kibō no Bokujō (Farm of Hope) was also in the area, driving around a car with a fake cow on a trailer. He has previously brought actual diseased cattle to Tokyo in an attempt to remind bureaucrats of the continuing plight of Fukushima.

The activists told me that they would be continuing the protest at the site, only no longer with tents. Alternatively known in English as the Occupy Tents, Anti-Nuclear Occupy Tent, No Nukes Plaza or Tent Plaza, the central structures are now gone but the idea of the “plaza” survives.

However, Japan’s relatively harsh rules on public assembly may make it harder for protestors to gather at the location in greater numbers for events like they used to, since now they will literally just be standing or sitting on the street. In theory, any public demonstration is required to be registered with police in advance. 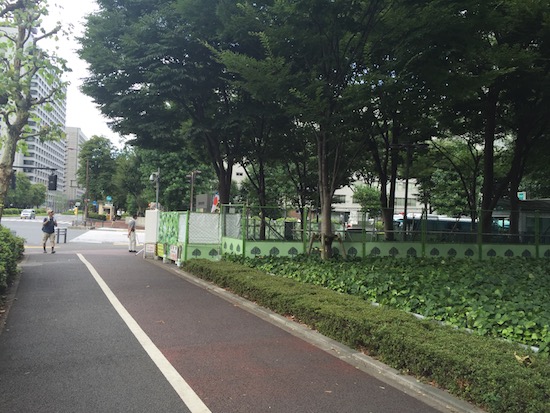 In my post on August 20th, I wrote that “the fury of Fukushima lives on in Kasumigaseki”. Was that too optimistic? We shall see.