The student activist group Zengakuren has launched a lawsuit against 15 members of the Tokyo Metropolitan Police Department after public security officers jostled activists at a two-day rally in early September.

Officers from the Tokyo Metropolitan Police Department Public Security Bureau (effectively, the TMP version of “special branch”) harassed young activists, attempting to identify them by tearing off their hats and masks. In the process, activists allege several of them were injured. 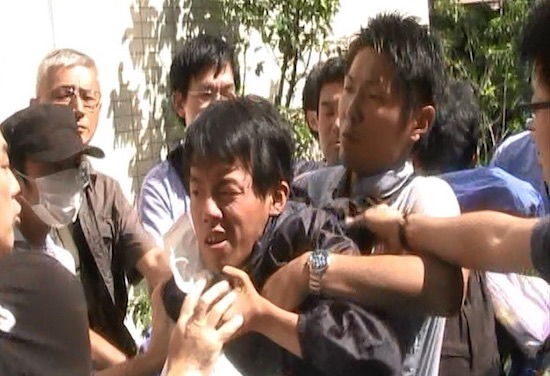 Regardless of your political leanings (Zengakuren is affiliated with the far-left Chūkaku-ha), it is hard to deny that Zengakuren’s video shows a degree of assault or police brutality. Though it is commonplace for public security police to surround the entrance to any such political meeting, photographing and making notes of everyone who enters, it is unusually provocative of officers to physically touch activists in this way.

It would seem to indicate an increase in tension and frustration over the recent surge in Zengakuren activities, notably at Kyoto University.

The Chūkaku-ha twice-weekly organ, Zenshin, called the events on September 1st and September 2nd a “heinous terrorist attack”, and named each of the police officers with an individual photograph. It reports that 31 lawyers are representing Zengakuren in the suit, which was filed on November 29th. There are five complainants and plaintiffs named in the suit, including Yōhei Sakube (Chair of Dōgakukai, the de facto Kyoto University branch of Zengakuren) and Ikuma Saitō (Chair of Zengakuren). Lawyers are seeking ¥2 million in compensation for each of the plaintiffs.

The suit alleges that the actions of the police officers amounts to violating the constitutional right to free assembly. It accuses the police of several specific crimes: abuse of power resulting in death or injury; assault by special public officials; and complicity in crime.

Interest in the case is apparently high: 10 newspapers attended a press conference on November 30th. (The activities of Zengakuren, like other far-left groups in Japan, are essentially ignored by the mainstream media unless a crime is committed.)

“Since the March 11th disaster and Fukushima nuclear accident,” Saitō told journalists, “many people have been rising up, against which state power is increasing surveillance and oppression of the people. We decided to launch this lawsuit because we wanted to expose an incident of assault by the public security police for the whole of society to see, and to show that you can win if you fight.”

Zengakuren itself has a significant militant history going back to the immediate post-war period. The Chūkaku-ha Zengakuren has not engaged in direct violent tactics for a long time, though its activists have nonetheless been arrested on many occasions over the past two decades, especially during the protracted campus struggle at Hōsei University and, earlier this year, due to protest actions at Kyoto University.

On December 12th, a Dōgakukai rally will be held at Kyoto University on several issues: opposing constitutional revision and the Abe government; calling for solidarity with the Korean Confederation of Trade Unions and for strikes to prevent a “Korean war of aggression”; and for the suspension penalties against four students who organised a small strike last year to be reversed. Due to the lawsuit, the protestors can surely expect a heavy escort and hostile reception from police.

This entry was posted in News and tagged Chukaku-ha, Student movement, Zengakuren. Bookmark the permalink.