Police have announced the arrest of an alleged member of the radical far-left group Kakurōkyō over a projectile attack at Yokota Air Base, a United States military facility in west Tokyo, in 2013. The 65-year-old Toyotsuna Numata was arrested, Tokyo Metropolitan Police said on July 14th, on suspicion of violating the Criminal Regulations to Control Explosives Law.

Originally known as Shaseidō Kaihō-ha (Socialist Youth Union Liberation Faction), Kakurōkyō (Revolutionary Workers) is a Marxist group committed to the struggle against capitalism and the US-Japan alliance. In addition to another, much earlier breakaway group, Kakurōkyō comprises two factions: the “non-mainstream faction”, also called Kimoto-ha, Yamashige-ha or Sekisaisha-ha; and the “mainstream faction”, or Hazama-ha or Gendaisha-ha. The non-mainstream, or anti-mainstream, faction is probably the only far-left group left in Japan that apparently pursues violent tactics in some form, albeit sporadically and largely ineffectively. It is suspected of some 25 violent incidents since 1999, typically targeting United States military facilities, though this is the first time police have pursued a case like this.

Numata is alleged to have manufactured the timer device for launching the projectiles in his apartment in Toshima ward. The arrest is far from out of the blue, since police have steadily investigated the case in the hopes of securing enough evidence to bring charges. Numata was previously arrested earlier this year on a minor charge relating to using false names, for which he was given a suspended sentence in May. In February 2016, police searched three suspected Kimoto-ha sites in connection with the attack on Yokota Air Base and arrested six members who obstructed the searches. It was during these raids that police uncovered plans, written on soluble paper, for building a timer circuit in Numata’s Toshima apartment, which matched one found at the air base with the mortar. The plans and other notes had Numata’s fingerprints on them. 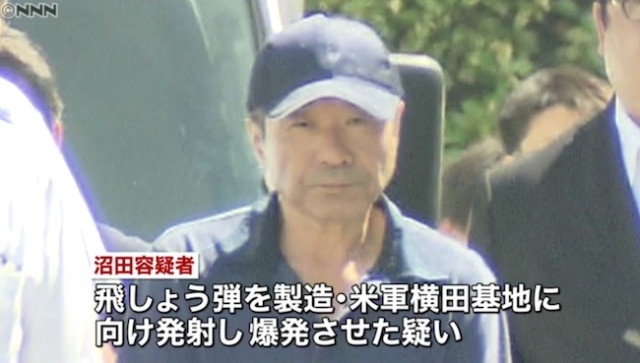 The incident took place on the night of November 28th, 2013 at Yokota Air Base, west Tokyo. Two projectiles were launched from a homemade mortar towards the vicinity of the base. One projectile landed around 600 metres from the base area. There were no injuries or damage to base property. Responsibility for the attack was claimed by the Revolutionary Army, which police believe is a covert guerrilla organisation within the non-mainstream faction of Kakurōkyō.

Such “attacks” carried out by Kakurōkyō are essentially more symbolic gestures than genuine paramilitary activities, though they also represent the final lingering vestiges of Japan’s violent far-left movement. Other groups also continued to carry out fatal and dangerous attacks until the 1990s, especially related to the anti-emperor and anti-Narita Airport movements, and even the notoriously violent in-fighting between the factions (known as uchi-geba) lasted until the start of this century in the case of Kakurōkyō, whose rift into its current two main factions was particularly brutal

According to media reports, Numata is the first member of a radical group to be arrested for an incident involving explosives since 1993, when a member of Chūkaku-ha was arrested in connection with the famous rocket attack on Akasaka Palace immediately prior to the start of the G7 summit in Tokyo in 1986.

Kakurōkyō is suspected of other recent projectile attacks, such as one in in Saitama in late 2014 and the April 2015 attack on Camp Zama.

This entry was posted in News and tagged Kakurokyo. Bookmark the permalink.