He passed away in the afternoon of August 9th in a hospital in Tomisato, Chiba. A farmer and landowner, Kitahara was the official head of the Sanrizuka-Shibayama United Opposition League Against the Construction of Narita Airport (also known as the Farmers League Against the [sic] Narita Airport, or more colloquially known in Japanese as Hantai Dōmei, or the Opposition League), which campaigns against the expansion of Japan’s premier airport.

After Issaku Tomura, who initially led the protest movement until his death in 1979, Kitahara was the most prominent figure in the Hantai Dōmei. Though increasingly frail in recent times, Kitahara’s fervour was boundless. I met Kitahara once and heard him at rallies on a few occasions. He remained a passionate public speaker despite his advancing age and he was still participating in rallies until last year. 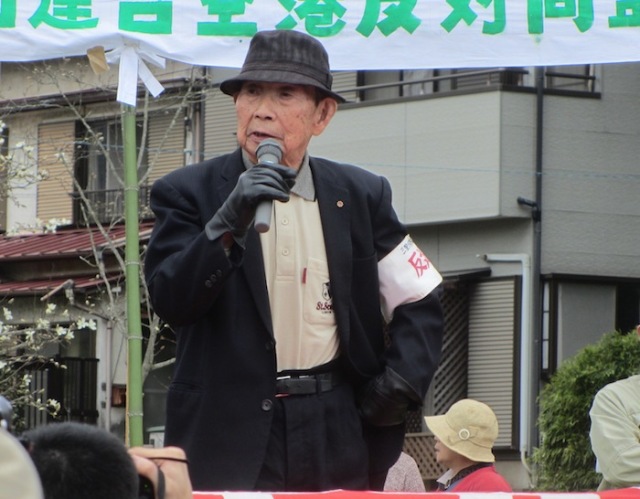 While Japan today enjoys an unprecedented inbound tourism boom that has seen record numbers of foreign visitors use Narita Airport, the protest movement has now endured for over five decades. Also known as the Sanrizuka movement after the area in rural Chiba in which the airport was built, the protests saw local farmers unite with activists from far-left groups to oppose the construction of a massive new airport. The decision to build the airport in Sanrizuka was announced in 1966, affecting several villages in the district. Locals and activists quickly rallied under the umbrella of Hantai Dōmei, using both violent means and civil disobedience to resist the surveys and eventual expropriation of the land. Though many did accept reality and sell up, opposition escalated throughout the 1970s, resulting in several deaths on both sides, lengthy delays and suicide.

In the 1980s and following the opening of the airport, Hantai Dōmei split into three main factions, though Kitahara’s has refused to accept any form of terms with the airport authority and continues to organise protests and launch law suits. Kitahara’s faction has long benefited from the firm support of Chukaku-ha (Central Core Faction), the common name for the far-left Kakukyōdō (Revolutionary Communist League). Over the past few years, their joint efforts have particularly revolved around supporting the farmer Takao Shitō in his campaign to protect his land from seizure.

News of the death of Kitahara also comes coincidentally just prior to the opening of a new documentary about the airport protest movement, The Fall of Icarus: Narita Stories, a sequel to the successful 2014 film The Wages of Resistance: Narita Stories. While the first film had focused only on the local farmers, the latest one highlights the contribution of student activists and young radicals. It opens from mid-September at Image Forum in Tokyo.

This entry was posted in News and tagged Koji Kitahara, Narita Airport protest. Bookmark the permalink.