Finally ending months of speculation and anticipation, it was confirmed on 1 December that Emperor Akihito would formally abdicate on 30 April 2019. His son, Naruhito, will then ascend to the Chrysanthemum Throne, the Heisei era will end and a new age begin. What none of the media reports seem to mention, however, is that the abdication issue has reanimated the anti-emperor movement, a long-running if peripheral cause in Japan.

On 26 November a rally was held in central Tokyo calling for the abolition of the world’s oldest monarchy, followed by a street march that passed through Harajuku and Shibuya, two of the busiest shopping districts in the city. The small demonstration was practically engulfed by a massive police entourage in full riot gear, forming a human shield around the attendees from the many ultra-nationalist counter-protestors who also turned up to voice their fury.

Though the organisers are not using the name publicly, the current wave of protests are associated with Hantenren (Han-Tennōsei Undō Renraku Kai, or Anti-Emperor Activities Network), a veteran republican group. The march came just days after one of its associates Tachikawa Self-Defence Forces Monitoring Tent Village, an anti-war watchdog group, was attacked by far-right activists. A vehicle used by the group was badly damaged on 23 November when members turned up to demonstrate against an event held at JGSDF Camp Tachikawa in west Tokyo. Photographs published online by activists show a smashed windscreen, wing mirror and more. They accuse the police of standing by and letting the rightists attack the vehicle, though three were arrested.

While the police are ostensibly present in large numbers to protect the protestors’ right to march, the relationship is not viewed favourably by Hantenren. Indeed, the police and media both seem to employ tactics designed to devalue the anti-emperor protests. In advance of the 26 November event, police released a warning that there may be trouble along the route, which was dutifully published in various media outlets. This compounds the image that the anti-emperor protests are a public nuisance and provocative, inviting right-wing responses. The press coverage of the protest was typical of others, giving a cursory summary of the event but then focusing the “story” on the spectacle of the scrum between police, protestors and ultra-nationalists, supplemented by quotes from pedestrians complaining about the inconvenience of such a march. 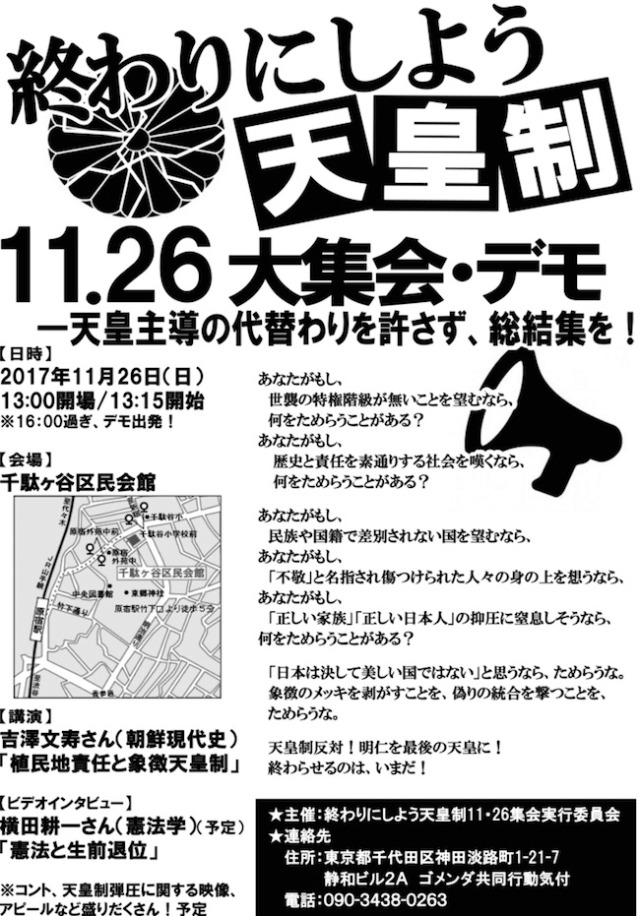 The first chapter of the Constitution of Japan eals with the role of the emperor. “The Emperor shall be the symbol of the State and of the unity of the People, deriving his position from the will of the people with whom resides sovereign power,” it begins. In those eight articles, the emperor’s function is protected but carefully defined as a constitutional monarchy. The emperor is intrinsic to the parliamentary procedures of the land, yet is solely performative in his duties. This allowed the nation to shed itself of the issue of Hirohito’s potential guilt over World War II but retain the dynasty that stretches back continuously to Jimmu in 660 BC. For the establishment and voters, with the exception of the radical left, who wanted the whole system abolished, or the radical right, who wanted it bolstered, the reform neatly sidestepped the core dilemma but simultaneously expedited the task of bringing closure to the past so that the country could set about rebuilding its economy. However, it has kept things in limbo: the taboo over debating the necessity of the Imperial Family remains very strong, and, for the ultra-nationalists, the sacredness of the emperor — the vessel more than the person — has been little affected by the decades that have passed.

The emperor system is popular in Japan — that is, Akihito is a cherished figure. When he made the unprecedented step in July 2016 of announcing his intention to abdicate, the public was largely sympathetic to the plight of a man in his eighties still carrying out official duties daily. He has carved out a reputation as a figurehead for pacifism, touring Asia to make gestures of reconciliation to the victims of Japanese imperialist aggression. His support rose also after the 2011 Great East Japan Earthquake, when he visited evacuees in the northeast of the country and made another rare video address.

The Imperial Household has experienced a further boost courtesy of its youngest generation, who are now mostly in their twenties. Next year Princess Mako of Akishino will marry someone she met at university. The dwindling numbers of people in the dynasty has ignited a debate about why the female members must lose their status when they marry. Given the government’s inertia on reforms within the imperial family — as seen in its relatively slow response to the ageing emperor’s perfectly reasonable appeal to be allowed to retire — this discussion will likely not come to anything, in the same way that the lack of a male heir for many years still did not produce any legislative progress on the custom of primogeniture. In the end, Prince Hisahito was born and all was well, making the young boy next in line to the throne after his uncle, Naruhito. That being said, it is his older sister, Kako, who is the current media darling for the obvious reason that she is undeniably the most photogenic royal.

The emperor system is a key target for the vestiges of Japan’s New Left as well as parts of the left in general. It represents not only the legacy of the war and imperialism that Japan never settled fully, but also ingrained residues of patriarchy and privilege. For a long time, abolishing the system was a fundamental policy of the Japanese Communist Party, though it has softened its outward stance in recent years. Anti-Japaneseism, which emerged in the 1970s as a militant wing of the New Left, was opposed to the emperor system and one group even attempted to assassinate Hirohito. For Okinawans, who were treated as second-class, expendable citizens by the mainland Japanese during the war and suffered immeasurably, the emperor was a symbol of this discrimination. When Akihito visited the southern prefecture as crown prince in 1975, projectiles were thrown at his passing motorcade and, more seriously, he was attacked at the Himeyuri no Tō (Tower of the Lilies) memorial site by leftist protestors armed with a Molotov cocktail and a firecracker. But these are the radicals. Republicanism is a much stronger position to take in Japan than elsewhere, even on the left. While, say, The Guardian is openly opposed to the UK’s monarchy, one would not read an op-ed in a liberal Japanese newspaper like the Asahi Shimbun directly criticising the emperor system.

Hantenren was established in the 1984 and has been a small yet consistent force in the movement ever since. When Hirohito died in 1989, a wave of feisty protests was held during the course of the ascension ceremonies of Akihito. The right-wing rituals on 15 August, marking the day that Japan surrendered to the Allies in 1945, are usually countered by a march by Hantenren. The movement remains fringe and the media attention it receives is more curiosity than debate. In fact, the Japanese media adopts kid gloves to any discussion of the emperor, since the slightest linguistic faux pas or perceived act of lèse-majesté may spark a violent reprisal from ultra-nationalists. (In this respect, it is refreshing yet shocking to read the literature produced by Hantenren or Han-sen Han-tennōsei Rōdōsha Nettowāku [Anti-War Anti-Emperor System Workers’ Network], an Osaka-based anti-emperor group, and see the emperor simply referred to as “Akihito” or “Emperor Akihito” as opposed to the standard, more respectful “Tennō-heika” that the mainstream media uses.)

The protest movement is currently organising a major street protest in Tokyo approximately every six months, each time attended by 100-200 people and also accompanied by heavy police presence and uyoku dantai far-right groups that transform the event into a frenzied scrum. At a march in Kichijōji in November 2016, one of the demonstrators’ vehicles was damaged by the counter-protestors (incidentally, it was the same van that was vandalised at the recent Tachikawa Self-Defence Forces Monitoring Tent Village protest). The follow-up rally and march in the same area in June this year had an even stronger police escort to keep the ultra-nationalists further away.

Zengakuren also recently released a video noting the position of far-left Marxist group Chūkaku-ha. The activists note that the timing of the abdication is deliberate, as it will overshadow the May Day labour protests and help the prime minister sneak through his agenda of Constitutional reform. They end by stating Chūkaku-ha’s aim to “smash” the abdication and era change.

Besides these street protests and ideological pronouncements, we can find other developments related to the emperor system. Students from Nihon University are co-organising “Film and the Emperor”, a film festival this month at Eurospace, a trendy cinema in Shibuya, showcasing films that deal with the emperor system.

Several new books have also been published this year about the emperor system, abdication and abolition. This certainly does not suggest that republicanism is around the corner for Japan, but it indicates that a discourse is building beyond the usual pamphlets and newsletters put out by Hantenren and others, circulating only among supporters or at mini-komi clearinghouses. 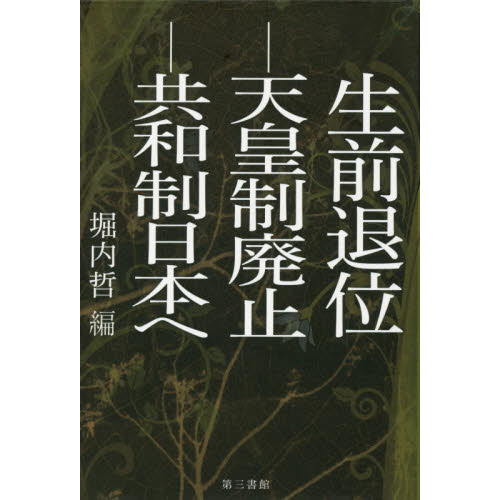 One of several books about the emperor system published in 2017. This one explicitly deals with the abolition of the system and calls for Japan to become a republic.

The most notable artistic response has been the aforementioned film, Today My Empire Sings, by Meirō Koizumi, which was exhibited in Harajuku in May this year. While artists, like journalists, are inevitably reluctant to tackle the sensitive topic, the present discourse will surely continue to unfold in fits and starts until April 2019 and beyond.

This entry was posted in News and tagged Anti-emperor, Hantenren, Ultra-nationalism, Uyoku. Bookmark the permalink.