The Right to the City: Solitary walking Article 9 protestor in Shinjuku challenges the pedestrian paradise

He was alone but he didn’t care: on that cold Sunday afternoon he paced steadily up and down the main boulevard in Shinjuku, along past the perfumed elegance of Isetan and the unpretentious blare of Bicqlo to the edge of the pedestrianised zone, and then back again. With neither ceremony nor clamour, he held up a medium-sized laminated placard calling for the protection of Article 9 of the Constitution, which renounces Japan’s right to war, while slowly spinning a pellet drum in his other hand.

The solitary protestor functioned almost like an outrider, scouting up and down Shinjuku-dōri while a rally at the East Gate of Shinjuku Station, protesting the US military base relocation to Henoko Bay, departed on a march around the area. He stayed mobile and silent so as not to disrupt the foot traffic or block the street. In this way, he could navigate a loophole in the laws that prevent citizens from protesting or marching without a permit. He melted seamlessly in and out of the everyday whilst simultaneously invading it with his peripatetic demonstration. He was ignored, yes, but that was to his advantage. Too much attention and he risked being shooed away by the zealous older gents who sometimes patrol the “paradise paradise” zone to ensure there are no disruptions to the cycle of consumption. Rather, this anonymous, courageous wayfarer was asserting his right to the city: the “access to the resources that the city embodies”, as David Harvey says, “a right to change and reinvent the city more after our hearts’ desire”. 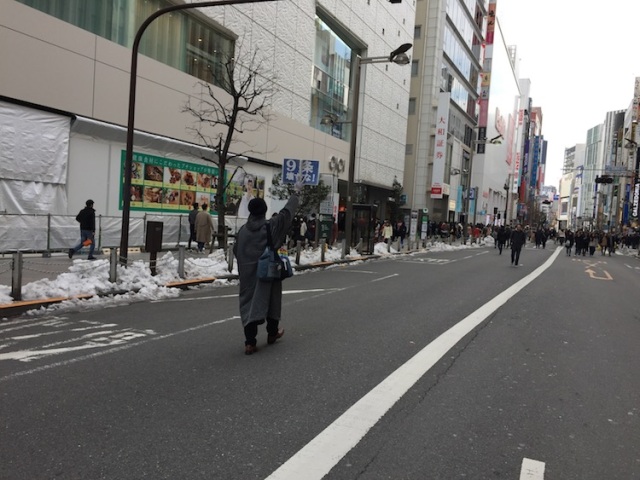 In principle, the pedestrian paradise does not allow vending, performance or protest. The streets are given up to the citizens but only if you walk or shop. On a purely pragmatic basis, the pedestrianised zones that appear at the weekend in public areas like Shinjuku and Ginza are not dissimilar to the privately owned public spaces (POPS) in Tokyo that seem open to the public, but are in fact subject to rules set by the corporations, of whose very existence users may not even be aware. This is only logical, given that private sector money has produced the spaces. Invariably the regulations will forbid such activities as busking, skateboarding and unlicensed vending. Christian Dimmer calls these Tokyo POPS “uncontested” — but is it possible to contest when such rules fetter and cosset them?

I have recently been conducting fieldwork on the Shinjuku West Gate protest movement, which holds silent vigils with placards every Saturday evening from 5pm to 7pm on the street in front of Odakyu Department Store and then in the underground plaza, where the Beheiren-linked folk guerrillas held anti-war music concerts in 1969. They too walk a tightrope between what is allowed and forbidden: by not making speeches, staying out of the way of the traffic and keeping their numbers low, they escape classification as a rally or march. Like the solo walking protestor I happened to observe, they are almost entirely ignored by the flow of weekend crowds passing through the West Gate, yet they represent something more enduring than mere immediate public response. Much like the anti-war flash mobs that resulted in a legal battle with Ebina City, these movements are pushing the boundaries of what is permitted, proscribed and tacitly condoned.