Just as the Olympic Movement is an international one, so too are anti-Olympic movements transnational. While the motivations and direct arguments of activists opposing the hosting of a Games in a certain city are often local, or initially local, they connect to broader questions about global elitism, capitalism and exploitation. Groups and activists are making efforts to form an international anti-Olympic network. Such expressions of solidarity are now easier to achieve now thanks to social media, websites and other digital tools available today.

As part of my on-going research into the opposition movement to the 2020 Tokyo Olympics, I also follow examples of the international solidarity between activists in Japan and other countries.

Although given very little media attention in Japan, the activists associated with Hangorin no Kai (literally, Anti-Olympics Group) have continued to forge partnerships with overseas movements and research how other cities are protesting the Olympics, including a field trip to Rio during the 2016 Summer Games.

Now, as the Winter Games take place in Pyeongchang, Hangorin activists have travelled to South Korea to join local peers engaged in opposing the Olympics, which have been overshadowed by the political war of words between the United States and North Korea.

Korean activists have formed the Anti-Pyeongchang Olympics Alliance to publicise the negative aspects of the 2018 Games and their output has included information on the protest campaigns in Tokyo, Los Angeles and Paris. Hangorin has reciprocated by sharing information in English and Japanese.

In particular, it published a list of seven reasons for opposing PyeongChang 2018: massive environment damage, evictions of local communities, the financial burden, brutal conditions for workers, the attendant nationalism, the fraudulence of the Olympics as a promoter of world peace, and the corruption. Much of these criticisms are echoed in the arguments by campaigners against the 2020 Tokyo Games.

Hangorin and Korean activists staged a small street protest in Seoul on February 8th, followed in the evening by the Korea-Japan Anti-Olympics Forum. On February 9th, ahead of the actual opening ceremony, activists from the two countries demonstrated in front of the gates of the venue, holding out banners that said “Olympics Kill the Poor” and “Reverse the 2020 Tokyo Olympics”.

Flyer for the Korea-Japan Anti-Olympics Forum 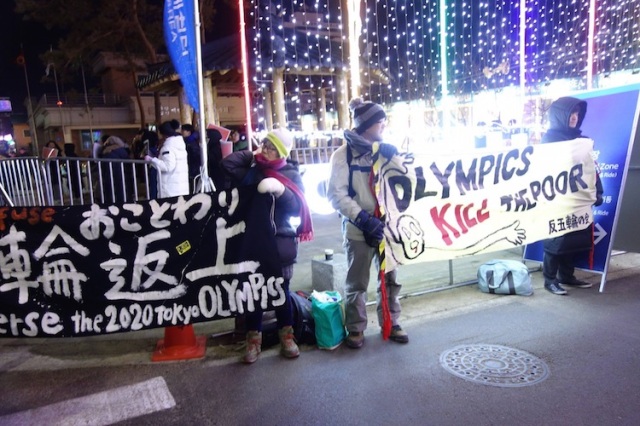 As Vice President Pence and Kim Jong-un’s sister sat down to watch the ceremony while purposively ignoring each other, activists back in Tokyo provocatively wrote “NOlympics Anywhere” in English on the Miyashita Park construction site hoarding, using large make-shift cardboard letters decorated with messages in English, Japanese, Korean and Chinese. (While the cardboard letters were only temporarily attached, the fencing has warnings against graffiti and the area is almost certainly patrolled by security guards.) Activists then held a mini street demonstration in front of the former park located just a stone’s throw away from the heart of the main Shibuya shopping and eating district.

On night of the Pyeongchang Olympics opening ceremony, an anti-2020 message was posted on the Miyashita Park construction hoarding in Shibuya

Long associated with Tokyo’s homeless population, protests and counterculture, especially since the controversy ten years ago when Shibuya tried to sell the naming rights to Nike, Miyashita Park is currently undergoing redevelopment as part of the revamping of Shibuya to coincide with the 2020 Olympics. Along with Meiji Park, where the New National Stadium has subsumed homeless people’s shacks, Miyashita Park has been a flashpoint for Hangorin and the anti-2020 movement’s protests.

In LA, the joint Korean-Japanese actions were answered by a statement of solidarity by NOlympics LA.

This entry was posted in News and tagged 2020 Olympics protests, Hangorin, Miyashita Park. Bookmark the permalink.