Although Japan can appear very safe and there is undeniably little petty crime, the calm exterior masks two key conditions: that Yakuza control over sections of society is rampant and it is likely in part this network of organised crime that keeps street crime low; and that the police maintain a close watch on citizens for signs of aberration.

Indeed, when someone “suspicious” is encountered in public, police may overreact and swarm the suspect, making their power known — performing the might of the law — and perhaps implicitly warning passersby that they should always comply with what the boys in blue say.

Activists in Japan have denounced the recent arrest of a peer for refusing to assent to a stop and frisk. Late at night on 25 March, a person identified only as “A-san” (Mr. or Ms. A) was apparently on his or her way home when two police officers appeared and began an interrogation on the street.

This is called shokumu shitsumon in Japanese, translating more literally as “questioning in duties” but effectively meaning a spot check or stop and frisk. Police may deploy the tactic on anyone they deem “suspicious” enough to merit attention. The criteria is hazy and the cause to question someone might be very trivial. It’s late a night. Your bicycle looks too old or too new. You are foreign (particularly if you are South American, black or Chinese). If you resist, officers will make it harder and harder on you, and you may then find yourself arrested and in detention for 23 days.

This was seemingly the situation on 25 March. What is crucially different, however, and why it features on this blog, is that A-san is associated with activists working in Sanya, a slum area in Tokyo for day labourers, and anti-Olympic protest groups. (It is not clear as of writing if A-san is himself or herself a known activist. He or she is described as nakama, a “friend” or “associate”.) Police wanted to conduct a shokumu shitsumon stop but A-san refused, as is the right of any citizen. A-san asked to see the police officers’ IDs and their grounds for the stop, but was apparently ignored. The police instead demanded A-san show them what was in his or her bag. What happened next is where the details become subjective but by the end, A-san had been arrested on a charge of obstructing public officials in carrying out their duties. Supporters claim that A-san was injured and belt broken in the resulting scuffle that ultimately involved over ten officers. They say A-san was then taken away to the nearby Minami-Senjū police station and allegedly interrogated until 5 a.m.

This video was a different case entirely from 23 February but shows an example of shokumu shitsumon on a man refusing to comply. Note how several police officers surround the man and prevent him from moving. Any attempt to leave will entail physical contact with the police, which might then be grounds for arrest for obstructing a public official.

Activists have joined together to form a support network. As I have written about elsewhere, these kyūenkai support groups play a vital role in helping arrested activists (and non-activists) on remand or serving sentences, and represent a robust, committed yet obscure section of the civil society in Japan.

In addition to protesting at Minami-Senjū police station on 2 April, they have publicised the case online on the Sanya Labour Welfare Hall Action Committee website and on social media, and among their network. (An appeal was made at the end of a symposium I attended about Fukushima and the anti-2020 Olympics movement.) Incidentally, while it might seem counterproductive for supporters not to identify their detained peer and provide a name to personalise an otherwise abstract cause, this is very typical of left-wing social movements in Japan, which protect the privacy of the suspect/victim (not least because sometimes he or she may not be responding to police officers during interrogations, even to acknowledge their name). During the crackdown on the veteran newspaper Jimmin Shimbun last year, for example, though it was well known that Yōichi Yamada was the editor-in-chief, he was never named in campaigners’ publicity materials when he was arrested.

The publicity materials here are striking for another reason. While the tone of the statements and denunciation is tough, activists have also made use of “cute” touches in images and banners as well as cardboard signs (a kind of Lumpenproletariat version of the usual handwritten large white scrolls activists unfurl to tell the waiting press pack the result of a court case). This would seem to constitute a familiar approach from freeter precariat activism that can mix the cute and the disorderly with more dogmatic or forceful elements. 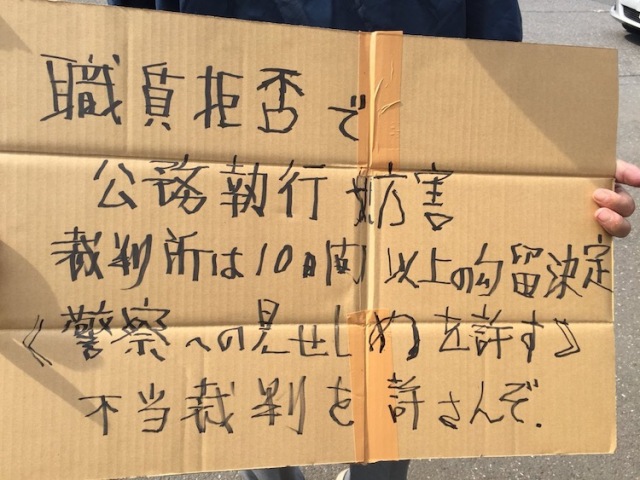 A cardboard sign with a handwritten protest denouncing the extension of detention for A-san for refusing to comply with the police questioning on the street. It says the police are trying to use A-san to set an example. Image via @ReclaimMpark.

A banner, saying “Release quickly!”, with a “cute” cat for decoration. Image via @ReclaimMpark. 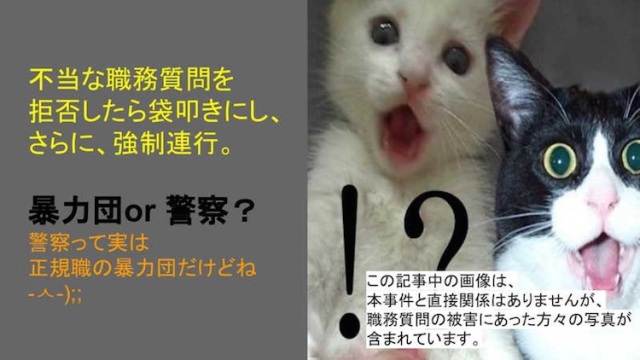 The image of the shocked cats has a disclaimer saying it is “not directly related to the case” but “includes photography by people who have suffered from stop and frisk”. Image from the Sanya Labour Welfare Hall Action Committee website

Another cat decorates messages decrying the 2020 Olympics as a pretext for stop and frisk tactics, and alleged police brutality and infringement on human rights. Image from the Sanya Labour Welfare Hall Action Committee website

A-san is linked to groups operating outside the major New Left sphere but that have been instrumental in the more recent wave of social movements in Japan pursuing causes on behalf of the homeless, freeter and day labourer class. These were arguably pioneered by far-left radicals in the 1970s, but are more prominent today as Japan’s civil society and left-wing movements have emerged from the period of militant activism. The happy-go-lucky and creative style of this Heisei-era Lumpenproletariat and precariat activism was perhaps best exemplified by the vibrant Miyashita Park movement almost ten years ago that successively fought against privatisation.

After an initial ten-day detention was confirmed on 27 March, A-san had his or her period of detention without indictment extended again at a hearing on 3 April at Tokyo District Court on the basis that A-san resisted police violently and struck an officer in the chest. Supporters say it is a frame-up. The charge of hindering or interfering with the duties of a public official (kōmushikkōbōgai, 公務執行妨害) is a convenient catch-all frequently turned to as a pretext for arresting left-wing activists. The latter often accuse police officers of faking a stumble or physical collision in order to manufacture cause for arrest during a stop and frisk or search of a property.

This is, of course, just a single isolated case — and, some might say, a minor one at that. But activists have pointed to the broader context and I’m inclined to agree. When contacted, the Sanya Labour Welfare Hall Action Committee remarked that the arrest is “merely the tip of the iceberg”.

It points to a troubling trend where activists predict “police oppression” to rise in the lead-up to the 2020 Olympics in Tokyo. There are certainly signs of increased surveillance already, such as the introduction of more security cameras. The A-san support group also writes in its official statement that the police presence has increased in the area around Minami-Senjū Station, which is used for people travelling to and from the Sanya district.

Moreover, the passing of the Conspiracy Law by the national government last year and the recent revisions to the Tokyo Anti-Nuisance Ordinance by the Tokyo Metropolitan Government all extend the powers of police and authorities over Japan’s citizens, and have particular implications for social and protest movements. And about which, I plan to write soon.

A-san was released today from police custody, according to announcements by the Sanya Labour Welfare Hall Action Committee.

While I found the case noteworthy for its connections to activists against a backdrop of assiduously growing pressure on civil rights, it may seem even more startling when raised as an example of what can happen to any ordinary member of the public regardless of political affiliations. Citizens are not wholly powerless, however. In the past, victims have launched lawsuits seeking compensation over perceived illegitimate stop-and-frisk stops. As Japan gears up for the 2019 Rugby World Cup and 2020 Olympics in Tokyo, further instances of controversy will inevitably arise as the state comes increasingly into conflict with the citizenry. And therein lies the rub, since the onus is on the civil society to monitor, engage and, if necessary, protest.

This entry was posted in News and tagged 2020 Olympics protests, Civil rights, Sanya. Bookmark the permalink.