Shinjuku ward in Tokyo revealed a plan on 27 June to reduce the number of parks that demonstrations can use from the current four to just one. The move was initiated as a move to combat hate speech rallies, which have been prominent in Shinjuku of late and which legislation in 2016 failed to prove completely effective against.

Shinjuku ward is surely concerned about the damage such small racist marches, which are always met with robust and even sometimes aggressive antifa counter-protests, do to the image of the area around the main station, which always throngs with tourists and shoppers. (The hate groups target Shinjuku because it is home to Tokyo’s largest population of ethnic Koreans.) Local neighbourhood and shopping street associations are also no doubt bothered by the traffic disruption and noise these rowdy rallies and marches entail.

The plan, which comes into effect from August, will see a new provision added to the rules regarding the use of parks as start points for marches and rallies. Such events will no longer be able to use parks that are located close to schools, educational facilities and shopping districts, which will ban use of Kashiwagi, Hanazononishi and Nishitoyama parks. It means that only Shinjuku Chuo Park, which is tucked away in the quiet skyscraper district very near the Tokyo Metropolitan Government Building, is left. Though march routes could still presumably then take a protest through the more crowded parts of Shinjuku, the main rallies would be kept far from public gaze.

Coming after the controversial revision to the Tokyo Anti-Nuisance Ordinance in the spring, those in the Left in Japan are increasingly worried that civil rights are under threat. Antifa activists and liberals have, of course, long campaigned for the prohibition of hate speech rallies but such an indiscriminate countermeasure as this would affect others more severely, given that racist protests account for only a minority of demonstrations at the four parks. (Rallies categorised as involving hate speech had been on the decline, though Shinjuku witnessed a sudden surge up to thirteen in the 2017 fiscal year.) 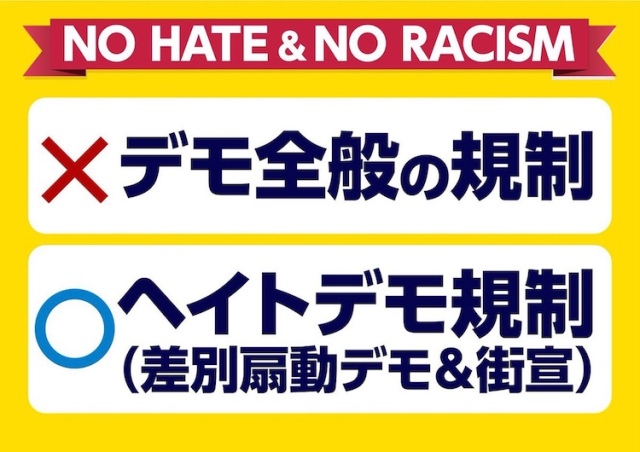 Placard design recently issued by the Anti-Racism Project group calling for restrictions on hate protests, rather than demonstrations in general

Since several parks in Shinjuku are popular choices for all kinds of rallies, this latest development has quickly attracted anger from activists and opposition parties, who argue that limitations should be placed on hate speech alone. A Change.org online petition was launched, receiving over 2,500 signatures so far.

In the run-up to the 2020 Olympics in Tokyo, many also expect further restrictions on the use of certain sites for protest activities, while the coronation of the new emperor in spring 2019 — an event that will trigger a flurry of anti-emperor demonstrations and then the prerequisite aggressive counter-protests by ultra-nationalists — will possibly prove another pretext for limiting freedom of speech and assembly, as it did when the current emperor took the throne nearly 30 years ago.

With decently sized plazas are few and far between, parks are commonly used in Japan as the location for the start (and end) points of protest marches, which typically begin with a rally. Certain parks have become associated with particular movements. Kashiwagi Park has recently become a regular site for racist groups to hold events. A few years ago, Yoyogi Park hosted the most iconic rallies from the height of the post-Fukushima anti-nuclear power movement.

As protests and rallies in Japan have to be approved beforehand by the Tokyo Metropolitan Public Safety Commission, it is not unknown for the right to use parks to be withdrawn sometimes by police and local government authorities. An anti-nuclear rally scheduled for Yoyogi in 2014 had to relocate to the much less accessible Kameido Chuo Park in the east of the city after the authorities retracted permission, ostensibly due to an outbreak of dengue fever.

Parks are coveted areas of rare public space in the city, which is more famous for its neon and concrete towers that green lungs. Something like 3.4% of Tokyo comprises public parks and gardens, compared to 38.4% in London and 14% in New York. In fact, parks in the Western sense did not even exist in Tokyo until the late nineteenth century. As such, when these spaces are endangered, people often react due to the immediate impact not just on protestors but also families and the homeless (who often stay or store their belongings in parks). One of the most vibrant and much-studied examples of this was the movement that emerged between around 2008 and 2010 to protect Miyashita Park from privatisation. It succeeded, though the park has since been closed and subsumed within the large-scale commercial redevelopment of Shibuya in conjunction with the Olympics. My current research related to the anti-Olympics movement in Tokyo actually focuses on Miyashita as well as Meiji, another park in the centre of the city where homeless residents lived, as contested sites in a fight against gentrification but also as emblematic of how 2020 is a flashpoint in the struggle for the right to the city.