On 23 September, locals and activists gathered in Kōenji, west Tokyo, to protest plans to redevelop the area that opponents denounce as commercially motivated gentrification.

Mustering supporters with the English slogans of “gentrification is not progress” and “Kōenji against gentrification”, the rally in a park was followed by a march taking a leisurely two-hour route around Kōenji and finishing with an after-party at TKA4, a newly opened counter-space in the neighbourhood.

Kōenji, located in Suginami ward a few stops west of Shinjuku on the JR Chūō Line, is renowned as a somewhat chaotic den of counterculture and the offbeat, particularly street fashion and music. I attended the rally, which had a vibe more festive than denunciatory, though was unable to go on the march itself. I estimated approximately 300 people at the rally, most of whom then joined the two sound cars for the parade. The shambolic and easy-come-easy-go atmosphere of the event attracted a broad church of participants. Among the attendees were plenty of veteran freeter activists and Kōenji types of all ages, ranging from families to middle-aged hippies, musicians and a smattering of foreigners and hipsters. Perhaps serving as an indicator of the breadth of this laid-back demographic, even the fascist-anarchist and cult activist Kōichi Toyama was to be found in the crowd giving away copies of his latest book.

The protest was organised by Hajime Matsumoto, a leading figure in Heisei-era counterculture and famous for co-founding Shirōto no Ran (Amateurs’ Riot or Amateurs’ Revolt), a much-celebrated network of thrift shops and spaces in the area. It is regarded as instrumental in the growth of freeter culture and slacker activism in the 1990s and 2000s promoting alternative living that rejected the mainstream corporate lifestyle, as many did (willingly or otherwise) in the wake of the economic bubble’s collapse. Lesser known is that it kickstarted the anti-nuclear power movement protests very soon after the Fukushima crisis began with a successful march in Kōenji in April 2011. Only later, especially in 2012, did the movement build into the massive rallies in Yoyogi Park and the weekly vigils at the Kantei for which it became iconic — but by then the beatniks of Kōenji had already been pushed out by the harsh tactics of the police. 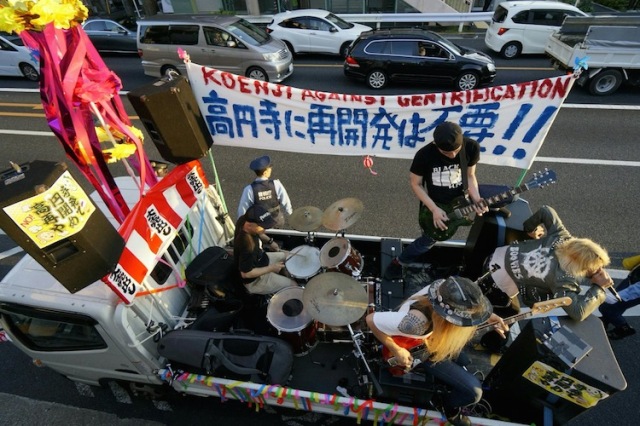 The redevelopment plan itself, which has attracted little publicity so far but awareness of which was boosted by an article Matsumoto published on Magazine9 in June, pivots on a major new road that would essentially split Kōenji in two, ostensibly on such pretexts as the restricted access for emergency vehicles into the maze of small alleys where many eateries and shops are located. Locals fear the disappearance of the charming disorder and diversity of the neighbourhood, to be replaced by cookie-cutter condos and chain shops. Matsumoto illustrated his article with the following comic strip in English, cleverly highlighting how such “redevelopment” also has the adverse effect of lowering the cultural value of a community that acts as soft power appealing to tourists.

If this all sounds familiar, you’re right: a similar thing already happened to Shimokitazawa in Setagaya ward a few years. That district has survived but is notably different these days. One of the speakers at the rally particularly cited Shimokitazawa, whose redevelopment sparked local opposition and much discourse. All was in vain as the railway companies still went ahead with their plans, but the hope is that Kōenji can be saved from the same fate. There is no exact timeline on the project, it seems, though Suginami could theoretically start it at any point now.

As such, this is a fight to protect the pandemonium that makes Kōenji what it is as well as a struggle to main the public’s right to these streets. Among the speakers at the rally, a lawyer referenced the contentious decision by Shinjuku in central Tokyo to reduce the number of parks in the ward that protests can use for march departure rallies to just one. Another speaker was a young activist from the self-governing Yoshida Dormitory at Kyoto University, whose residents face imminent eviction. Other speakers included Karin Amamiya, a well-known precariat activist and writer, and Kōjin Karatani, the acclaimed thinker and literary critic. Representatives from related movements in Hong Kong, Taiwan and South Korea also gave short speeches.

The rally then morphed into a clamorous and vibrant “sound demo”, where marchers trailed behind two sound trucks blasting out music: one with a rotating roster of live bands, another with a succession of DJs playing sets. The videos below should provide some insight into the rowdy mood these floats conjured up on the streets.

Perhaps due to Shirōto no Ran’s well-established “troublemaker” reputation, the confined nature of the march route, and the increasingly oppressive attitude by the state towards political protest in the run-up to the 2020 Olympics, the event came with a very heavy police presence, including dozens of public security bureau officers monitoring attendees and then riot cops escorting and strictly cordoning the proceedings. The marchers were kept fully separated into two groups and at times progress was completely halted. The musicians, however, were unfazed by all the fuss and continued to mosh and jive. Two arrests were made during the scrum of the march. This video shows the moment when one of the singers, the red-haired Gō Murakami, was taken away by police, though Matsumoto, who was driving one of the trucks, has since reported that both participants arrested were released without charge tonight. 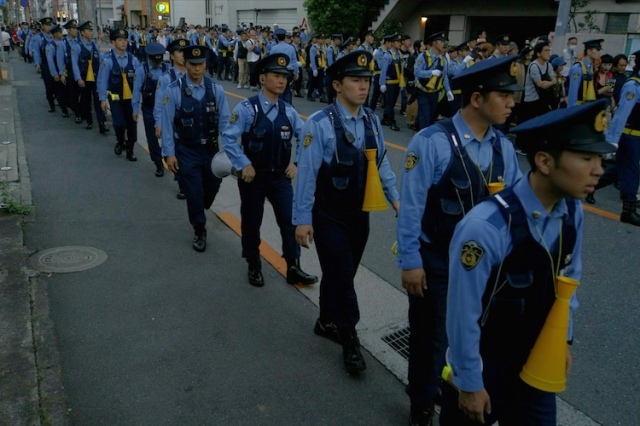