On 12 December in the plaza outside the Ryūkyū Shimpo newspaper headquarters in Naha, Okinawa, a group of men overturned a car. They wore masks, not in the customary manner of camouflaged rioters, but because of the coronavirus pandemic, and gloves, perhaps to provide protection against cuts. The car was a scrap vehicle fitted with a United States license plate, mocked up to look like a military vehicle, and it was overturned carefully onto wooden boards placed on the ground for the purpose. The men then took turns kicking and standing on the car. It was more ritualised than riotous, members of the media and bystanders far exceeding participants — and carried no risk of arrest or repercussions. 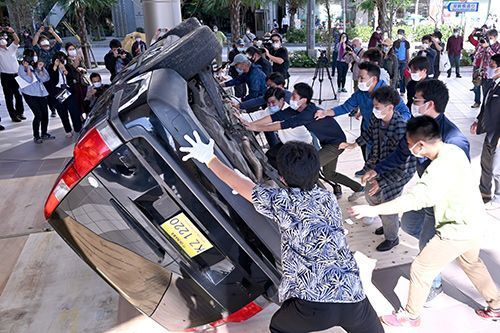 This was a very sanitised and careful re-enactment of a scene from the Koza Riot, which took place on 21 December 1970. According to the Ryūkyū Shimpo, the event was an art performance intended as a “vicarious experience” of the riot, and participants included a man who took part in the original disturbance as well as students. The vehicle was left on display until 13 December, when a related symposium was also held.

Formally established as a municipality in 1956, Koza’s bastardised name — written only in the katakana syllabic script — derived from an American nickname for the area. In this way, Koza was a hybrid place — a mix of Okinawa, American and Japanese influences. By 1969, its population for around 67,000 and it was the fastest-growing city in the prefecture besides Naha. It was a frontier town, full of newcomers and migrants, and with an economy heavily dependent on the United States military. This entailed lots of bars and brothels, but also live rock music venues. As the conflict in Vietnam raged, the Americans passing through Okinawa increased, anxious to make the most of their cash before flying out to South-east Asia, from where they might not return. This meant booming trade for businesses, but all was not happy under the surface.

The riot was sparked when a car driven by United States military personnel hit a citizen. Angry locals threw stones at military police, who responded with warning shots. Things escalated and eventually thousands took to the streets, torching seventy US military vehicles and facilities. A number of people even broke into the grounds of nearby Kadena Air Base. Eighteen were arrested and dozens injured. It was an explosion of the fury and tension that had built up over twenty-five years of occupation by a foreign power. The next day, 22 December, the US military announced 3,000 redundancies for workers employed at bases.

The violence of Koza is not easily forgotten, even if it has never been repeated in Okinawa. The prefecture reverted back to Japanese control in 1972 and Koza City itself “disappeared” in 1974, subsumed within the bounds of the newly created Okinawa City. But the core conditions that caused the riot have changed relatively little since then. Okinawa is still festooned with a US military presence, accounting for the vast majority of the forces that are stationed in Japan as part of the mutual security treaty with America. This imbalance has been a permanent thorn in the side of relations between Okinawa and the rest of the country. Incidents involving base personnel occur regularly, from crashes to crime — even rape and murder — and the impact of the continued quasi-occupation of the prefecture’s land is grave not only societally but also ecologically. And yet Okinawan (and mainland Japanese) responses have been essentially and commendably non-violent for the most part. The emphasis has been on rallies and protests, or on civil disobedience, such as attempting to disrupt the development of Henoko (Ōura) Bay by blocking vehicles.

In 1970, though, Japan was at the peak of its Long Sixties, a cycle of mass protests and unrest that lasted from around 1967 to 1972. Okinawa was, as noted, still under United States sovereignty, albeit with the pathway to reversion confirmed. Its people had learnt to co-inhabit with the foreign troops, but not without voicing their displeasure. When the Japanese prime minister, Eisaku Satō, visited in 1965, 6,000 took to the streets to protest the treatment of the prefecture, leading to police clashes and sixteen arrests.

This was a period of tumult, sometimes spectacular and shocking, from the riots of International Anti-War Day in October of 1968 and 1969, to Okinawa Day in April 1969 and the Shibuya Riot of November 1971, not to mention the university strikes and campus occupations. Okinawa was caught in the middle of this, not unlike Sanrizuka and the construction of Narita Airport, a touchstone issue for the New Left encapsulating the anti-imperialist cause against war — both the haunting legacy of Japan’s past war of aggression and the current one, waged by the United States with tacit assistance from Japan, in South-east Asia. Several strands of thought appeared in the New Left in relation to Okinawa: one, proposed by Chūkaku-ha, advocated that the Left should seize control of the prefecture from the imperialists; another was that Okinawa should be liberated, either made independent or given self-government; another argued that the real focus was not the US bases and Japanese imperialism, but rather the anti-revolutionary front in Okinawa that the US-Japan alliance perpetuated, solidified in the military bases; a fourth strand, advocated by Kakumaru-ha, criticised the other approaches as merely bourgeois, instead calling for organised efforts by workers to defeat the bases — to go beyond the issue of reversion to fight the labour rationalisation of the bases.

The New Left’s relationship with Okinawa was uneasy, at times co-opting the local dilemma of the prefecture into its macro-ideologies without dealing with the problem of its status as an inner colony of mainland Japan. The leftists would claim to speak in the name of Okinawans as victims of imperialist oppressors, but this earnest endeavour to liberate Okinawa as part of a wider ideological struggle arguably replicated the same hegemony of the imperialist and capitalism systems inflicted upon the prefecture by Japan and the United States. As Hidemi Suga has argued, the early 1970s witnessed a paradigm shift within the New Left in its attitude towards minorities. A fringe element of the New Left would emerge, arguing for Okinawan/Ryūkyūan independence as part of a revolutionary movement of dispossessed and oppressed peoples. While the militant manifestations of this strain of activism somewhat curiously saw wajin (Yamato) Japanese acting on behalf of, say, the Ainu or burakumin in largely ineffective acts of violence in the 1970s, Chūkaku-ha-affiliated Okinawans were themselves involved in direct actions in late 1971, such as invading the grounds of the Imperial Palace in Tokyo to protest the visit of Emperor Hirohito to the United States, while even more notoriously, the attack on Crown Prince Akihito in 1975 during a ceremony at the Tower of the Lilies was carried out by Okinawans associated with the New Left.

But the Koza Riot was not initiated by the New Left; it sprung up spontaneously from the streets, which makes its legacy less problematic, whereas the general consensus, as presented by mainstream accounts at the time and subsequently, is that the New Left became delegitimised by its violence (against the state, against citizens and against other activists). It would be surely unimaginable for such a re-enactment event to take place and receive serious media attention if the incident in question was, say, the Asama-sansō seige or the Shibuya Riot. This re-enactment was more permissible, though nonetheless unusual, and you would struggle to find similar events. And while the Koza recreation was about confronting a past trauma from the Long Sixties, the event was not at all like the re-enactments privately practised in the kyōsanshumi fandom, which reclaims the New Left by exploiting, consuming and collecting its “content”.

Albeit conspicuously stage-managed, the Koza recreation seems rather to inherit the more playful, performative and boisterous mode of protest and political expression Japan has seen especially since the Heisei period. The counterculture and bohemian scene in Kōenji has exemplified this, and there is even a direct parallel in the Operation Anti-War Asia! (アジア反戦大作戦) series of pacifist, anti-nuclear events organised in Kōenji and Asagaya in 2015. At one point this involved a car being smashed and overturned on the street by participants in what was a highly performative yet still rebellious stunt.

What is the efficacy of such a re-enactment? It is potentially reductive, falling into the trap of the digital era in which everything, even past civil unrest, is a commodifiable “experience”, an Instagrammable or tweetable photo opportunity. Or it is a genuinely valuable way to show people up-close the kind of actions that now seem so distant, but which in 1970 could easily occur if provoked by circumstances.

For all the unsophisticated zest and ludic anarchy of the Operation Anti-War Asia! stunt, an overturned car is “weird” in the sense proposed by the late Mark Fisher: it is an entity that is wrong, out of place; it should not exist here. Fisher makes a well-known distinction between the weird and the eerie, which we might also apply to the Koza event. The eerie, Fisher suggests, is a failure of presence. What is missing — actual unrest — is what makes this eerie; the upturned car — the damage — is there, but not the disturbance that created it, which has failed to appear. The unrest is hidden. It is lost, to borrow Patricia Steinhoff’s phrase, somewhere within Japan’s invisible civil society; no longer on display because, not least, the use of public space is tightly controlled, or because it has been forgotten or ignored, a relic from a complex, problematic past. In this respect, the Koza re-enactment is an attempt to confront the eerie everyday of Okinawa, living alongside historical trauma that fails to (re)appear and be resolved, by inserting the weird, an out-of-place entity — though not literally out in place if they had staged the re-enactment actually in Koza, but perhaps that would have been a step too far.

The act of overturning a vehicle still has power. During the melee of the Halloween street party in Shibuya in 2018, a small truck was overturned by exuberant revellers, sparking a police crackdown. Though the incident has not quite spelled the end of the street cosplay festivals — and this year, not even the coronavirus pandemic seemed to deter people — the scene was featured prominently and ominously in media coverage, and has certainly put the Shibuya government and Tokyo Metropolitan Police back on the offensive when it comes to tolerating mass gatherings in the district for Halloween, Christmas and New Year’s Eve. Even if fleeting, such moments of civil instability have the ability to disturb the everyday, clockwork routine of shopping and commuting that dominate the public sphere in Japanese cities. The challenge lies in capturing and channelling that same potency in non-violent ways.

This entry was posted in Essays, News and tagged Koza Riot, Okinawa. Bookmark the permalink.

1 Response to Recreating the Koza Riot, fifty years on