A cinema in Kanagawa Prefecture has called off the screenings of Searching for the Wolf (Ōkami o sagashite) scheduled for May due to pressure from ultra-nationalists.

In a statement released 4 May, the operator of Atsugi Cinema Kiki said that it had received word on 30 April from police of a two-day protest over the 8–9 May weekend by a far-right group (uyoku dantai) about showing the documentary. As is typical of such groups’ tactics, the protest would involve multiple black vans driving around the local area. These vans are fitted with speakers to play loud patriotic music and amplify slogans in order to cause as much of a nuisance as possible. The operator said that it was concerned about the trouble this would bring others in neighbourhood and, in consultation with the distributor, had made the difficult decision to call off the planned screenings. 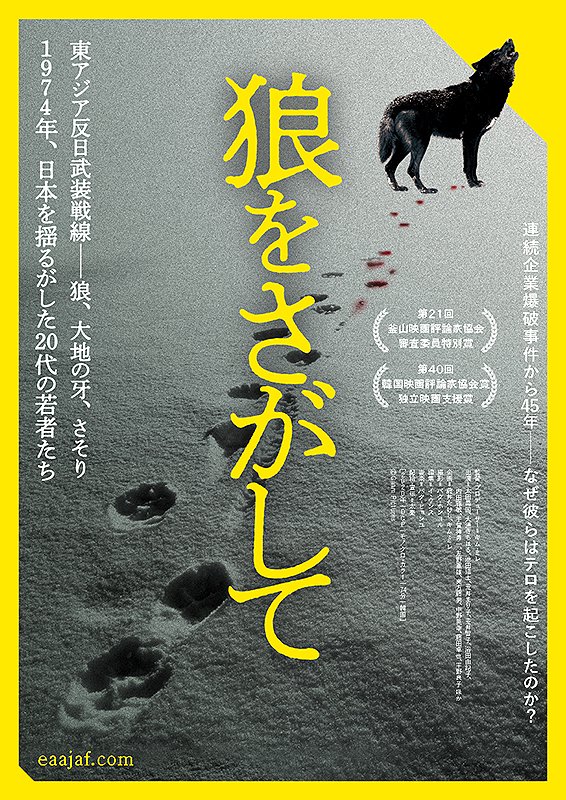 Given the subject matter, dealing with the East Asia Anti-Japan Armed Front (Higashi Ajia Hannichi Busō Sensen), one of Japan’s most notorious militant New Left groups that had an explicitly anti-Japanese ideology inspired by the country’s imperialist past and (at the time) neocolonial present in Asia, the film was always going to cause controversy. The fact that the film is directed by a South Korean woman and largely framed from the perspective of the group, including interviews with associates with its three cells, made it inevitable that it would attract attention and a response from the vociferous ultra-nationalist fringes. 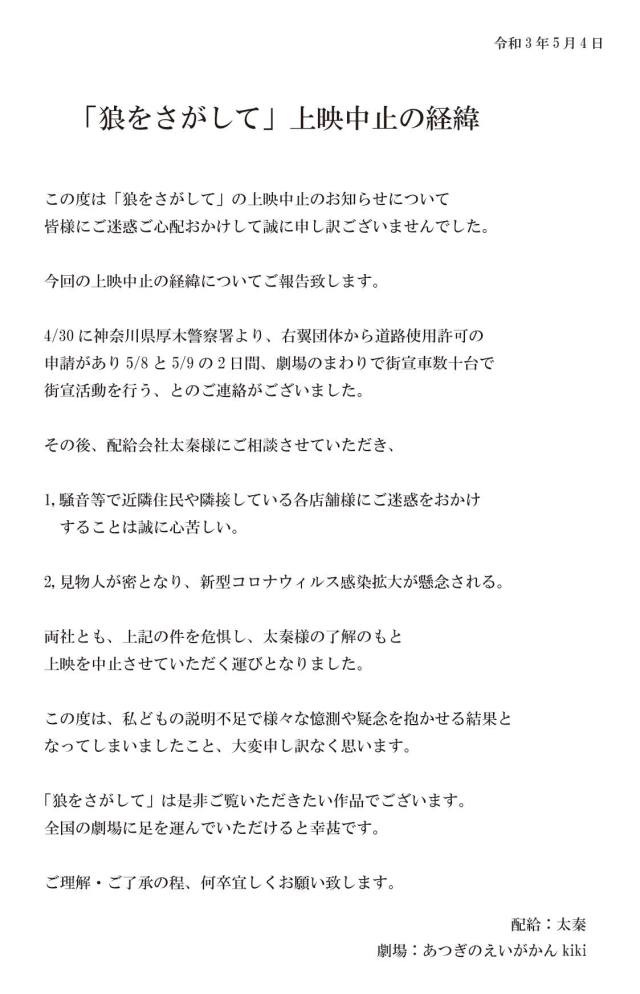 Starting 24 April, screenings at Yokohama Cinemarine have also been protested and disruption by right-wing vans driving in the area, forcing volunteers at least once to make a show of guarding the venue amidst a heavy police presence. On 7 May, two men entered the venue and spent around ten hours demanding that the operator cease screening the documentary, which is scheduled to run there until later in the month. The theatre has consulted police about the incident, the distributor and cinema’s lawyer revealed in a press conference on 10 May.

Though these aggressive tactics by far-wing groups are nothing new, they are usually more ritualistic than effective, making it a worrying precedent for artists and producers that pressure and intimidation by political extremists succeeded this time in cowing their perceived enemies and preventing the public from seeing a film. Note that it was the threat of a protest by ultra-nationalists’ vans, not an actual protest, that scared the operator in Atsugi and spurred them to act preemptively.

Freedom of speech has become an acute issue in Japan of late. In 2018, Shinjuku ward responded to an uptick in hate speech marches by curbing the use of its parks for all protests. In 2019, the Aichi Triennale closed an exhibition of anti-emperor artworks after receiving threats. Government subsidy for the festival was then withdrawn, though subsequently reinstated. Another documentary, Shusenjo: The Main Battleground of the Comfort Women Issue, lived up to its title, not only illuminating the war of words regarding historical memory of the “comfort women” (which has recently also sparked controversy in academia after J. Mark Ramseyer’s much-criticised intervention) but also itself triggering a heated debate over freedom of expression after several interviewees launched a lawsuit, claiming they were duped into participating (but in the process unwittingly created a version of the Streisand effect and increased publicity for the film). Though already touring widely and internationally, Shusenjo had its appearance at a relatively low-profile film festival in Kawasaki abruptly cancelled in 2019 until an uproar from peers in the Japanese film industry forced the organisers to reverse their decision.

The Atsugi Cinema Kiki’s statement also cited the coronavirus pandemic, in that the protest would become a spectacle and possibly cause crowds to gather, thus increasing the risk of infection. The pandemic has become more serious in recent weeks in parts of Japan, resulting in further states of emergency. While the major chains have bucked the trend and even welcomed record-breaking audiences for the Demon Slayer anime film last year, the crisis has had a major impact on independent movie theatres in Japan. Many are muddling through despite government calls for them to close temporarily but, given that most were struggling in the first place, the pandemic is possibly a final nail in the coffin. The most high-profile victim so far has been Uplink, which announced the closure of its Shibuya venue.

The pandemic also prompted Kyoto Minami Kaikan to postpone its showings of Searching for the Wolf (apparently because of reduced operating hours affecting the screening schedule). Nonetheless, after opening in Tokyo on 27 March, the film has enjoyed a gradual nationwide roll-out at small, independent cinemas (known as “mini theatres” in Japan), including talks with various speakers and a rare screening of a related documentary, Mothers, directed by one of the East Asia Anti-Japan Armed Front’s members, Kurokawa Yoshimasa, from behind bars. It is also showcased at length in the current issue of leading Japanese film magazine Eiga Geijutsu. Given the buzz and its performance at the box office despite the odds, the Atsugi Cinema Kiki cancellation may only represent an anomaly for what is a much-anticipated documentary.

Searching for the Wolf is on release in Japan at the same time as two other documentaries about traumatic events: Me and the Cult Leader (Aganai) explores the effects of the 1995 Aumn Shinrikyō cult’s sarin attack, while Whiplash of the Dead (Kimi ga shinda ato de) is about the landmark 1967 Haneda Airport incident in which a New Left protestor died during a clash with police.