Leading figures in the anti-2020 Tokyo Olympics protest movement have launched a lawsuit seeking ¥3.5 million from the Japan Sport Council, Tokyo Metropolitan Government and the state over the forced eviction of homeless people from Meiji Park in April 2016 due to the construction of the New National Stadium in Kasumigaoka.

The stadium is the most prominent and expensive architecture project related to the Summer Olympics scheduled to be open in Tokyo in July 2020. Following the demolition of the original National Stadium, the construction of Kengo Kuma’s much-trumpeted replacement has deprived the people staying in neighbouring Meiji Park as well as residents in government housing in the vicinity of their homes.

The homeless people and their supporters serving as the plaintiffs held a protest in front of Tokyo District Court and press conference on 14 March to publicise the start of their legal action. They argue that the rights of the people living in the park were not respected and that they should be compensated for the forced eviction and loss of their place of residence resulting from the closure of Meiji Park and the loan of the land by Tokyo Metropolitan Government free of charge to the JSC. 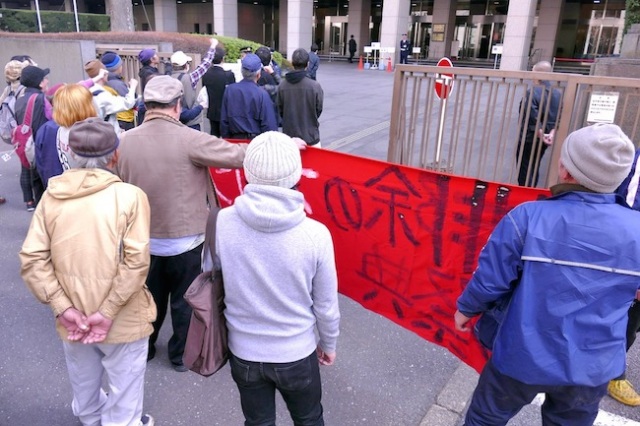 The evictions in April 2016 happened the day after Tokyo District Court accepted the JSC’s request to remove people from the park and led, activists claim, to the loss of important documents and possessions when belongings were forcibly taken away. In addition to violating Article 25 of the Japanese Constitution, which guarantees the “right to maintain the minimum standards of wholesome and cultured living”, and that “in all spheres of life, the State shall use its endeavours for the promotion and extension of social welfare and security, and of public health”, the activists allege that there was wilful negligence on the part of the Tokyo Metropolitan Government and JSC, while the national government has also failed to take corrective measures despite acknowledging the problems.

The lawsuit is organised by key groups and individuals in the opposition to the 2020 Games, including Hangorin no Kai, Nojiren, and Supporters for the Park Residents around the National Olympic Stadium. Notwithstanding the obvious financial and logistical challenges it poses for campaigns, the litigation is a calculated choice of action, embarked upon for both its symbolic value as protest and its practical potential as well as its alignment with similar legal struggles against Olympic-related evictions overseas. The anti-2020 campaigners very much see themselves as part of the growing global NOlympics movement.

That being said, it remains difficult to inspire interest domestically. Although the activists and their legal team organised a formal press conference, the case has yet to attract mainstream media coverage. Indeed, while the major setbacks and controversies over the 2020 Olympics are widely reported — not least the ballooning budget issues, withdrawn logo and replaced costly stadium design — the evictions and effects of the Games on certain overlooked sections of society are almost entirely ignored by the local press. As such, seemingly only alternative media and sympathetic left-wing media have covered the lawsuit so far. (26 March Update: it was picked up in a small piece for the 23 March edition of weekly magazine Shūkan Kinyōbi.)

Here is footage of the evictions from Meiji Park in April 2016.

On 24 March, activists will formally present their case to Tokyo District Court and also plan a rally at Mitake Park, which is close to Shibuya’s Miyashita Park, another flashpoint for opponents of the gentrification and redevelopment stemming from the 2020 Olympics.

This entry was posted in News and tagged 2020 Olympics protests, Hangorin. Bookmark the permalink.