Currently showing at Zen Foto Gallery in Roppongi is Hitomi Watanabe’s “Tokyo University 1968-1969 — Behind the Blockade” exhibition, a collection of nearly 30 prints of the photographer’s documentation of the University of Tokyo Zenkyōtō campus strike in 1968-69.

Shots of gebabō-welding demonstrators on campus. Face-offs with police and senior college staff. The Yasuda Hall tower pounded by a water cannon while a helicopter hovers overhead at the final reckoning in January 1969. Clashes and camaraderie: all is almost the stuff of cliché now. What is fresh about this selection of Watanabe’s images are the shots she took from inside the strike at Japan’s most prestigious university. 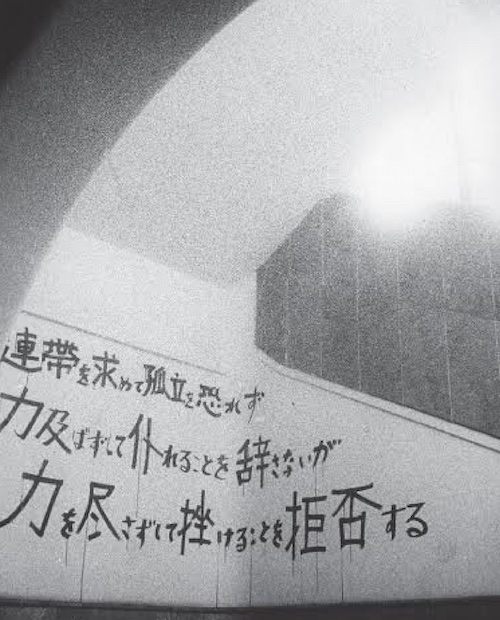 What happened at the University of Tokyo is probably the most iconic chapter in the whole student movement in Japan and so it is perhaps only the unusual paraphernalia that can now retain the ability to surprise. In this way, her lens picks out the graffiti — such as a cubicle door decorated with “Natural Monument: Principle Ōkōchi’s Favourite Toilet” — or a set of helmets newly painted, lined up to dry on sheets of newspaper. These elements, banal yet passionate, hint at the daily goings-on behind the sound and fury.

1968 was the year I began photography. I wandered around downtown Shinjuku with a camera, capturing people and whatever caught my attention. One night, I came across a crowd causing great turmoil in Shinjuku. I learned that it was an international anti-war protest. Before that, the Vietnam War had seemed to me merely information transmitted from the media, but I felt its reality after joining the protest. As the riot police searchlight lit up students’ helmets in the heaving crowd, their silhouettes would shiver violently. Student Power in Japan became a powerful tide fighting against society.

Around that time, I stepped foot into Tokyo University’s [sic] Hongo Campus for the first time, and met Yoshitaka Yamamoto, who was then representative of Tōdai Zenkyōtō. He inspired me. It was he who made me so determined to document the Todai protests. Inside the barricades actually was an open space, into which non-local students, the general public and even high school students could go.

Forty-seven years have now passed since then, and some memories are dimming — but film creates new memory. The spirit of Zenkyōtō is brought back to life.

To accompany the exhibition a catalogue of Watanabe’s Zenkyōtō images has been published, though it is a little thin to merit the ¥3,000-plus price tag. A better investment is Watanabe’s 1968 Shinjuku, which records many of the sights and characters from the eponymous area of Tokyo wallowing in the peak of its cultural influence in the late 1960’s. Despite the title, the collection actually also includes shots from 1969, such as the folk guerrilla gatherings at the plaza on the west side of the station.

Zen Foto was started by British expat Mark Pearson initially as a gallery specialising in Chinese contemporary photography, though it has branched out to include historical work, as well as Japanese post-war photographers. It has also explored similar terrain to Watanabe’s show, such as the Kazuo Kitai “Agitators” show it held at the end of 2012.

This entry was posted in News and tagged Student movement, Zengakuren, Zenkyoto. Bookmark the permalink.