As reliable as the queues eagerly lining up to buy chocolates in Tokyo’s department stores, so it comes every year: the protest march by Kakumeiteki Himote Dōmei (Revolutionary League of Men Unpopular with Women), shortened to Kakuhidō, against the tyranny of Valentine’s Day.

While Valentine’s Day in Japan this year has been unusually barbed following the decision by Godiva to put out a full-page newspaper raging against the Japanese custom of giri choco (obligatory chocolates), it’s nothing compared to the fury of Kakuhidō, which makes it a duty to declare war on all things saccharine and romantic in February.

Once again, Kakuhidō took to the streets to voice its anger against the commercialised festival of giving chocolates to members of the opposite sex (though it should be noted that in Japan, only the women give to men on February 14th, with men reciprocating exactly one month later on so-called White Day).

Kakuhidō’s 2018 rally and protest march, which referenced the much-discussed Godiva rumpus, was held on 12 February on the edge of Yoyogi Park. A small motley gang of self-professed “unpopular” (himote) guys (and apparently, two women) of varying ages got together in semi-disguise and cod far-left gear to demonstrate against the upcoming Feast of Saint Valentine. That the event took place on a public holiday marking National Foundation Day, ostensibly celebrating the accession of the very first emperor and frequently a noisy occasion for ultra-nationalist sound trucks, is possibly less incidental than it may seem, if (and it is a big if) we take the group to be some sort of embodiment of the Heisei-era Japanese male and all his discontents. 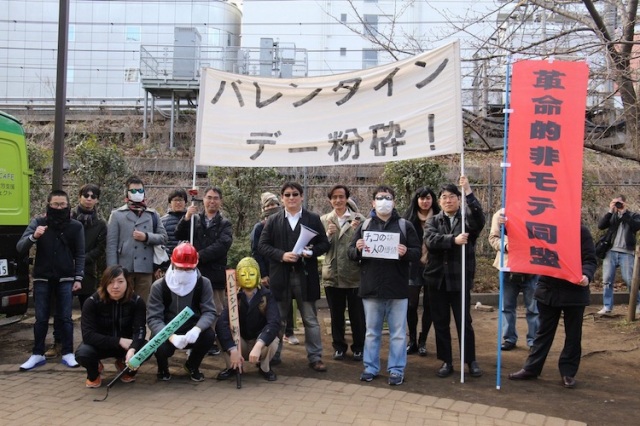 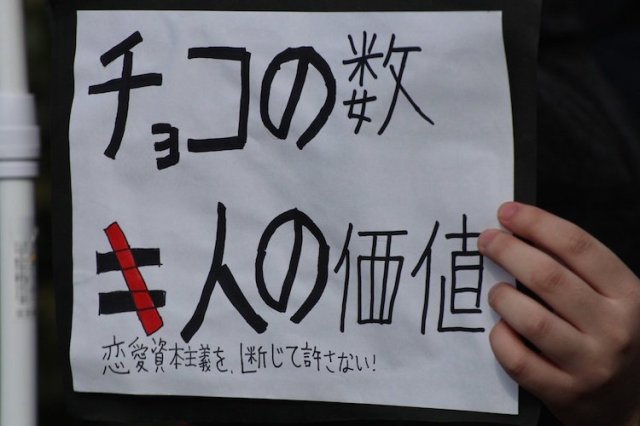 They started their rally at 1:30pm and then marched from 2pm for less than an hour through the temple of consumerism (and dating) that is Shibuya.

“Smash Valentine’s Day,” the main banner proclaimed. “Number of chocolates does not equal a person’s value” was the incisive comment of a handwritten placard.

Here is a sampling of the official pre-announced slogans for the protest with loose translations.

「チョコレート資本にだまされるな！」Don’t be deceived by chocolate capitalism!

「街中でイチャつくのはテロ行為。テロとの戦いを貫徹するぞ！」Making out in public is terrorism. We will carry out our fight against terrorism!

「非モテでも楽しめるオタク文化に反対する勢力に抵抗するぞ！」We resist opposition to otaku [geek] culture that can be enjoyed even if unpopular with girls!

「セックスの回数で人間を差別するな！」Don’t discriminate against people based on number of sexual partners!

According to the authorised history of the group, the gaggle of apparent misfits, pranksters and attention-seekers, which is not necessarily the same each year, has come together since 2006 to hold rallies against Valentine’s Day, White Day and Christmas (a romantic occasion in Japan). Despite the predictability of the output, though, every year it still attracts news cameras and column inches, especially online. As such, the rally schedule even included time for answering press interviews. There is also a lot of overseas media attention, mostly filed under the “Wacky Japan” label.

Three years ago, I detailed some of its background and, more interestingly in the context of my personal research, gestures towards Japanese New Left parody through tongue-in-cheek performativeness, from the lexicon of the slogans to the paraphernalia (helmets being most conspicuous). Quite how much the participants are merely japing quite possibly depends on each individual, but the group itself has proved its mode of parody is not wholly superficial by the very fact that has continued to hold protests for several years. If this is all just a big joke, then it is a committed one.

No, this recurring, ritualistic protest is not just for sniggering at, because something more significant is at work here. Its appropriation of past New Left tropes is liberating and inspired, and marks the group as part of a lineage that also incorporates kyōsanshumi (共産趣味) — the geeky love of all things communist, particularly the New Left, manifesting through the sharing of information and resources online, illustrations, staging recreations, survival games, and cosplay — the increasingly jocular and clownish, though nonetheless ideologically pure, Zenshin Channel series of YouTube videos by Zengakuren, and even ultra-nationalist moe. We have come so far from Asama-sansō and uchi-geba that the New Left can be commodified and refashioned without fear of repercussion or condemnation. People may well laugh at Kakuhidō for its off-kilter message and premise, but tellingly almost no one questions its legitimacy to affect the semblance of a New Left faction with helmets.

Kakuhidō’s language is certainly highfalutin and imitative of the far-left groups that once wrecked much havoc on the streets of Tokyo, but it is also carefully vague. There is nothing sexist, misogynistic or offensive in the slogans per se, and the group’s publicity warns participants against dabbling in provocations or discriminatory speech. This is partly a policy of practical self-protection, and a common caution by protest organisers in Japan, since doing so can lead to legal troubles and result in a permit to march being denied the next time round. But it also indicates that theirs is not a serious anger, but a cultivated performance accepting the role of dame otoko (no-good male) thrust upon them by the vicissitudes of the times, and determined to act it out creatively yet sustainably.

It is also worth noting that Kakuhidō specifies on its website that “participation is free” and that “no advance applications are required”. Protest, even as performative, ludic, and (arguably) inane as this, is made accessible for an age in which few protest.

Photos and videos by Rio Akiyama

This entry was posted in News and tagged Cosplay, Kakuhido, Kyosanshumi. Bookmark the permalink.